From Stray to Performance Partner

Had someone asked me two years ago if I would want to adopt a dog that had been a self sufficient stray as my next performance partner, I would have said a resounding "no"!  I think my qualms would have stemmed mostly from concern about the unknown.  Where had the dog come from?  What survival tactics had the dog learned?  Would the dog be able to move past those and become a good house dog?  Would the dog learn to trust me and be a real working partner?

Of course, Tessa was completely unplanned.  I took her as a short term foster, not as a dog that I intended to adopt.  And by the time we decided to adopt her, nothing mattered other than the fact that she belonged here and I simply could not let her go.

Tessa does have certain fears and quirks that come from her past.  Maybe from the time that she was on her own.  Maybe from the way she was treated by an owner in the past.  There is no way to know.  Some would see that as a major drawback, but I see it as part of what makes Tessa who she is.  When she steps into the Freestyle ring, she will be showing the audience who she is and the experiences that influenced her before she came into my life are just as much a part of her as those she has had since.

Tessa is a survivor.  She knows how to adapt.  She knows how to work through a fear and bounce back.  She recognizes what is good in life and she works to try to get it.  And for Tessa, working with me as a training and performance partner is something very, very good.

I would never intentionally turn a dog loose in the world to "build character", but I do recognize that a lot of what I love about Tessa was formed by the fact that she had to make it on her own or die.  A lot of it is temperament, too, of course.  But she certainly did learn how to make tough situations work for her.  I admire that in her. 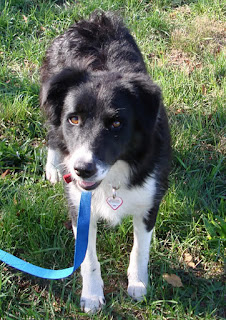 Photo:  Tessa's first photo in our yard after her bath on the first day she was here as my foster
Posted by Kristine at 7:49 AM