Where They Take Us

Dealing with the death of a once-in-a-lifetime dog is difficult in ways that I can't express, even when it has been more than two years after the fact!

For the most part, life does go on.  And there are times when I remember Speedy and smile, or even laugh a bit, or speak of him matter-of-factly without giving it a second thought.

But there are still thoughts and feelings and memories that sneak up on me unexpectedly and leave me feeling, all over again, that I have been smashed flat by a truck and that the gaping hole inside of me is really not all that much smaller than it was the day Speedy left this earth. 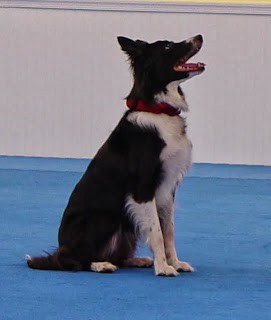 . . . Working with Bandit in Rally class - the way he moves and the way he looks at me while we go through the course - it feels exactly as it felt when Speedy and I went through Rally courses together.

. . . Sometimes an expression on Tessa's face, or a look that she gives me, that black face of hers can look so much like his.

. . . When Dean plays and I remember the way he and Speedy used to run together and share looks of utter delight as they played their Border Collie games 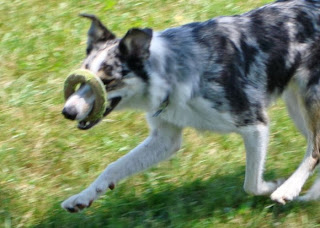 I ran into this especially when Bandit and I were choreographing his newest Freestyle routine.

Oddly, the problem wasn't that he reminded me of Speedy as we worked on the routine.  He decidedly didn't!

And it wasn't the music or use of familiar choreography, or anything like that.

I was getting upset because it had become crystal clear to me that Bandit is going to have the ability to do a lot that Speedy couldn't.

That might seem like a good thing . . . and, really, it is.  But I found a great deal of sadness there, too.

Even though I accepted early on that Speedy was very limited in his Freestyle ability, I had always sort of wished that he could have done a lot more than he did.  Don't get me wrong - I fully appreciated Speedy's unique performance talents!  He had a sense of artistry that I know I may never see again in another dog as long as I live.

But . . . it was the whole presence of mind thing.  Even after years and years and years of work to help Speedy control his stimulation levels as we performed together, he was still extremely limited.

He had to put so much of his brain power into keeping his stimulation levels in check that we had to keep all of his choreography, and all of his movements extremely simple.

I accepted that.  And I treasure every memory I have of every time and I moved on a floor together.

But I had hopes that Speedy and I simply could not realize together.

Surprisingly, that was profoundly upsetting to me when I truly realized it.

When it comes down to it, Bandit is with me in the here and now.  This is Bandit's turn.  And I would never even think of holding back from reaching his potential because I am upset about the limitations that a dog who is no longer even with me had!

Still . . . Freestyle will always be connected to Speedy for me.  And it seemed that there had to be more of a resolution - on an emotional level - than just to make up my mind to focus on Bandit.

Today, out of the clear blue sky, it suddenly dawned on me.

Bandit and I are where we are, and Bandit and I can do what we will be able to do, because of where Speedy and I got together.

Bandit and I are not continuing what Speedy and I did together.  We are on our own path.

But we are on that particular path because of the path that I walked first with Speedy.  He got me here.  I am who I am today, in large part, because of him.

And because of Sammie and Maddie and Dean Dog and Tessa, too!

All of the desensitization, all of the off-switch games, all of the time we spent gliding across the floor with Speedy's paws beating to the music, all of the training that we did on moves that Speedy never could have the presence of mind to perform fluently in an actual performance . . . it is all a part of who Bandit's person is.

And so, in a really cool and particular way Speedy is still with me.  The fruits of his work are always with me, and with every dog I will ever live, train, and perform with.  Maybe, in some mysterious way, I can bring a little bit of who Speedy was to me to each of them.

And, after all, isn't that a lot more significant than the ability to perform highly technical Freestyle moves?  I'd say so!

But, I feel a lot better about the whole thing now.  I am excited to train Bandit's routine with him, and to see where he and I are able to go together in our Freestyle. 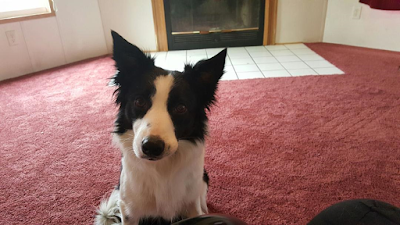 Bandit, ready to train in our newly re-carpeted Fireplace Room!