In just three training sessions we have progressed to a paw touch to a cane, and starting to put the behavior on cue!

Posted by Kristine at 1:19 PM No comments:

Bandit is a year old now, and I have yet to teach him a good understanding of paw work.

I have tried to introduce paw work to him several different ways.  First, the old, use a treat lure over the head, click when a paw raises a little, and treat method.  He never really seemed to associate the click with the paw raising.

I also tried the method by which I taught Dean.  It was easy peasy.  I picked up Dean's paw, clicked and gave him a treat.  Picked it up again, clicked and gave him a treat.  After doing that twice, he gave me his paw readily when I put my hand out.  Did not work for Bandit.  Like Speedy, although not quite as emphatically, he did not like me taking his paw like that.  Dean didn't care.  I won't continue a process that is aversive to an individual dog, so we dropped that quickly.

Finally, at a targeting workshop, I learned a nifty method where you have the do lying down and use body motion.  Bandit got the foundation game quickly, but I didn't have any guidance after the workshop to take it to the next step, and we just kind of let it go after that.

Yesterday I got fed up.  I decided to just toss it all in the trash can and train him the way I trained Speedy.

Speedy did NOT like to have his paws touched.  Bandit isn't super crazy about it, but Speedy truly hated it.  So, I taught him by putting a board on the ground and I shaped him to touch that board with a paw.  Speedy loved shaping and working with objects, so that happened quickly.  Once Speedy was touching the board on the floor readily, I lifted it up slightly so Speedy had to reach up a bit to touch it.  He understood right away.  Then I took a dowel and held it the way I had been holding the board.  Bingo!  He touched the dowel.  I put that on a cue, "tap".  At that point I did not care which paw he used.  "Tap" just meant "touch it with one paw".  Finally I stretched out my hand, offered it to him, and said "tap".  He ever-so-gently reached up with his paw and touched my hand.  It was very sweet.  Speedy was never one to "shake hands", but he loved raising a paw to touch a hand, a leg, a knee, a prop, a cane . . . whatever. 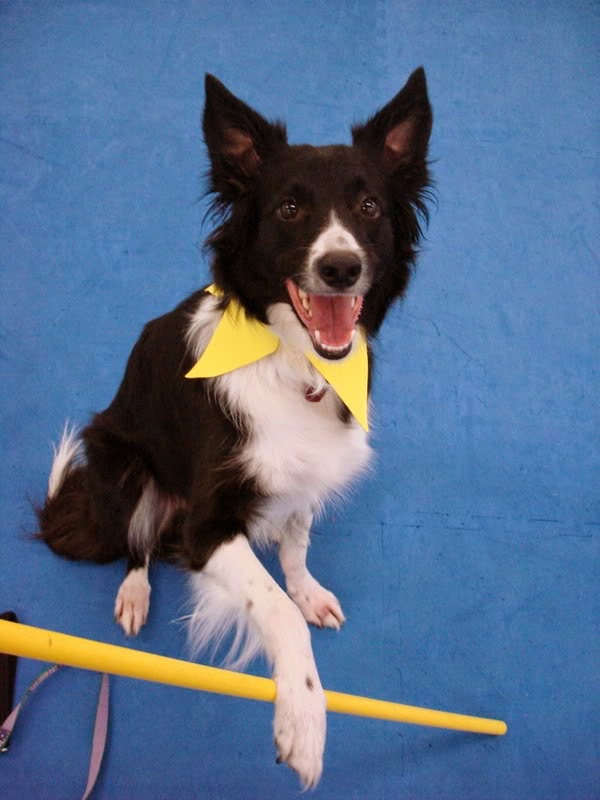 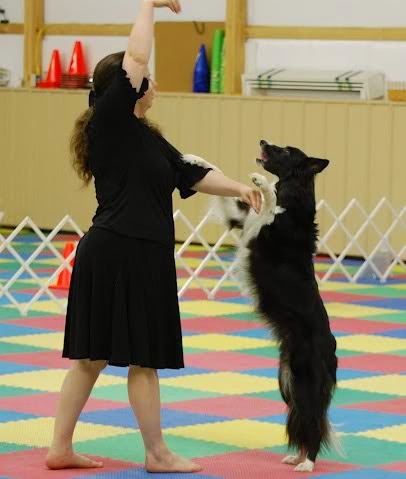 Speedy lightly touching his paw to my arm as he performed his "up up".  From "Reunion"﻿ 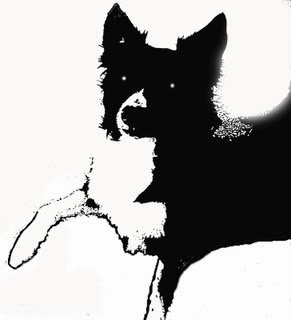 So, my Bandito!  It seemed to me that if Speedy had learned successfully through that method, Bandit would progress quickly, and he did!!  I am finding, very much to my surprise, that their basic learning styles are very similar.

We started with a board on the floor.  At first he offered two paws each time, so I turned the board to encourage him to touch with just one.  Then I raised it, and then raised it up some more.

He understood each step perfectly and he got it immediately!

Next time we work on this (today, if possible!), I plan to change out the board for a dowel, and to see if we can start adding the "tap" cue.  As with Speedy, I will transition to a specific cue for each paw once he really has the idea. 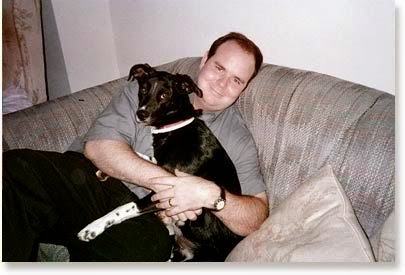 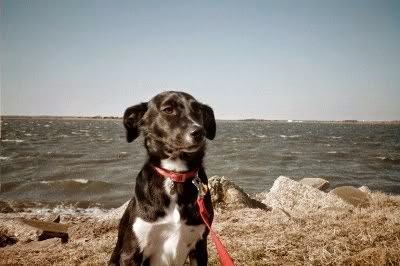 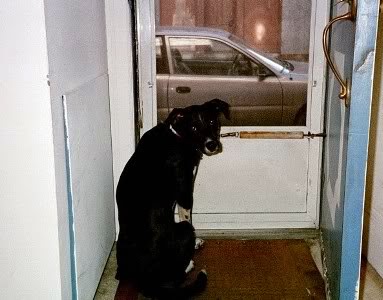 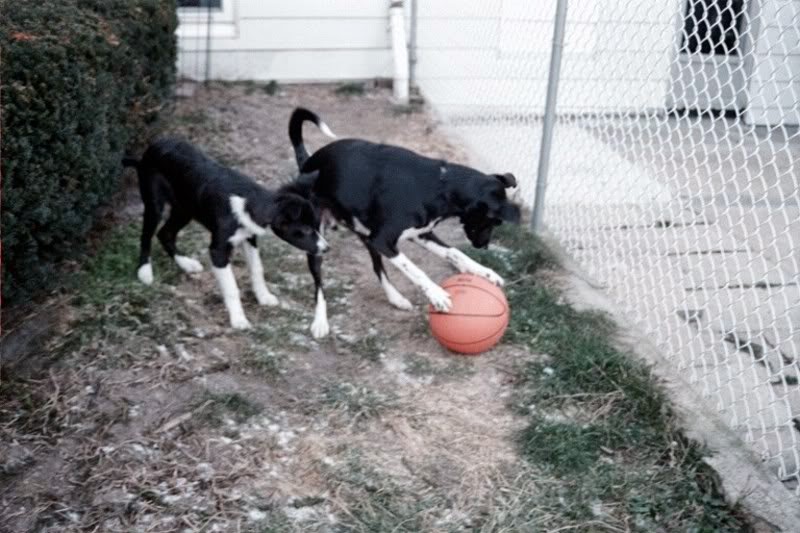 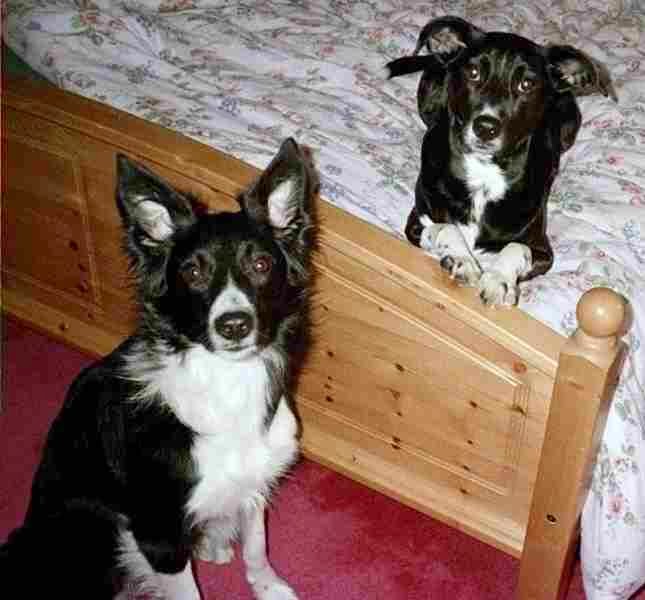 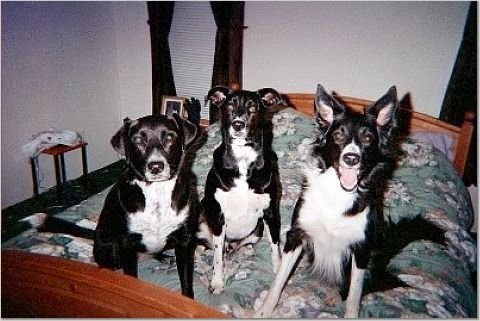 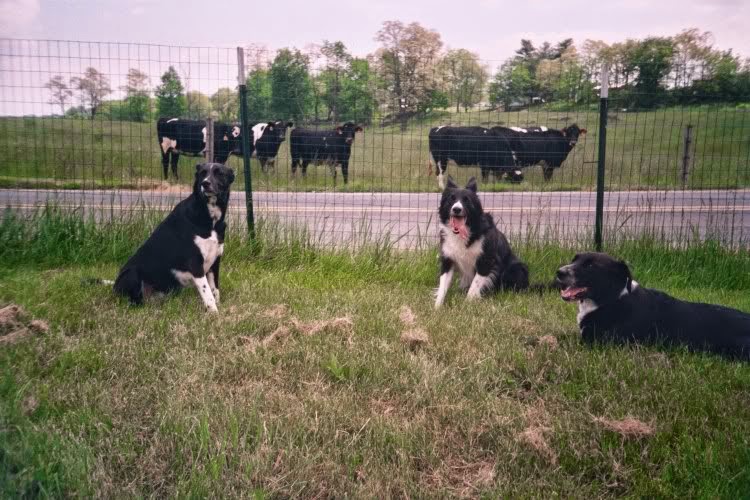 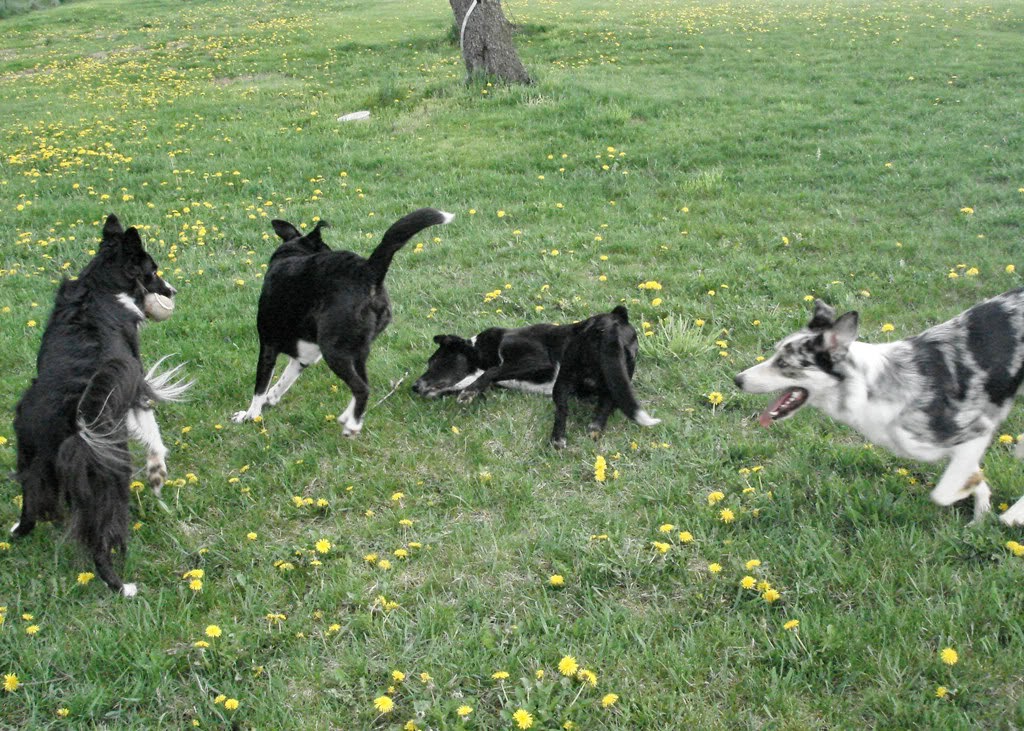 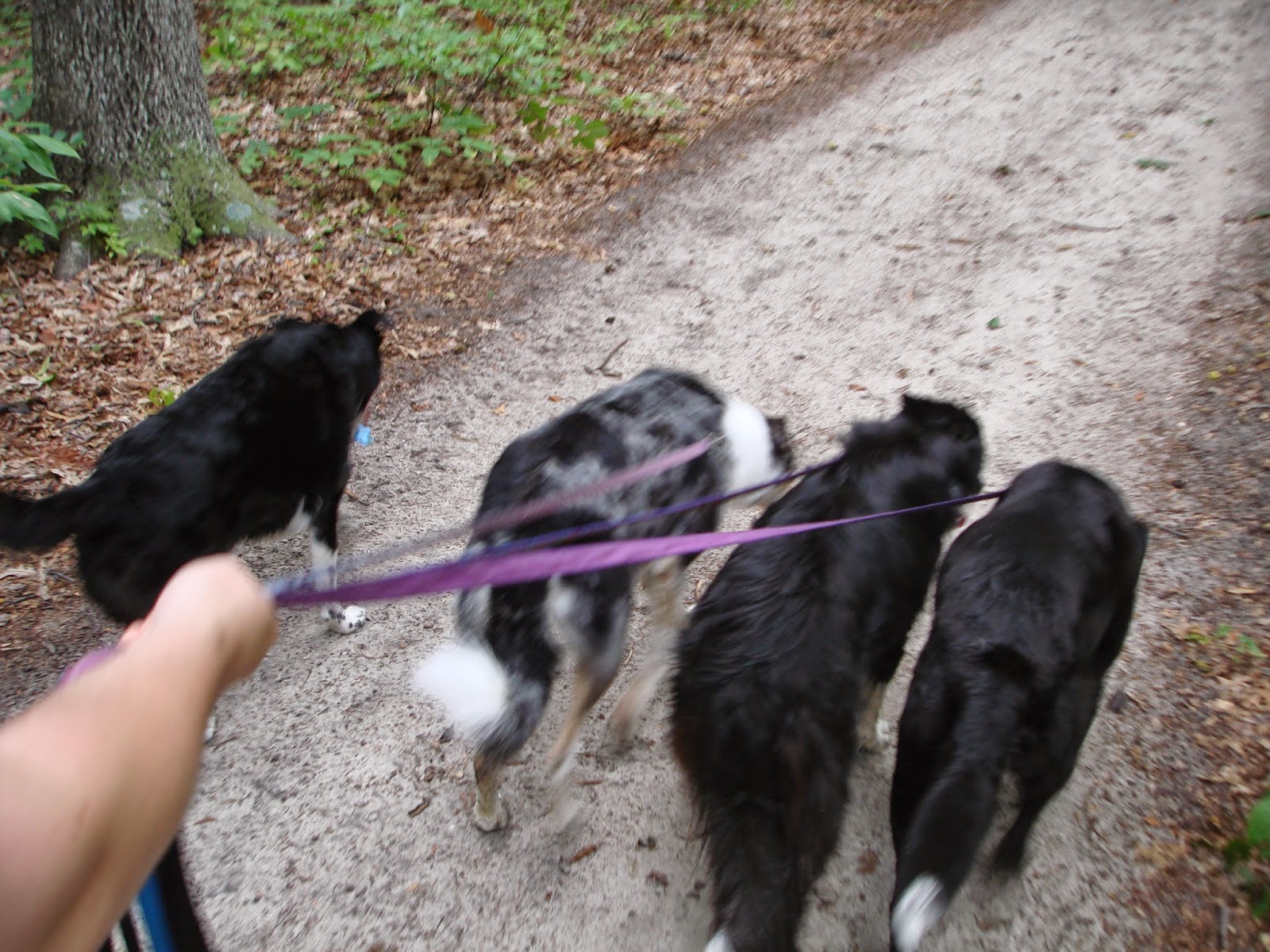 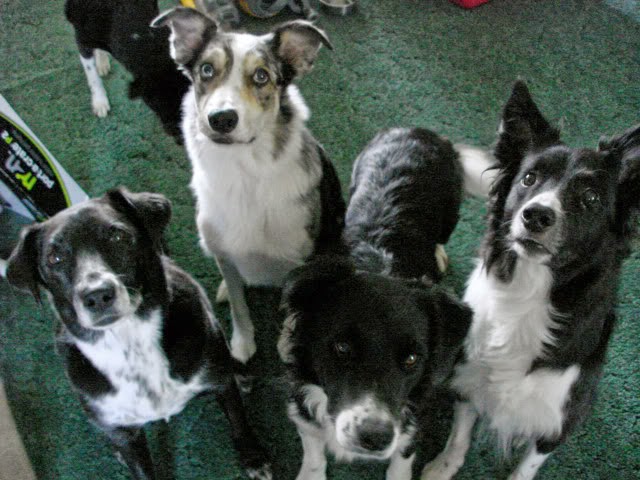 Sammie is in there!  He's behind Dean, sniffing!! 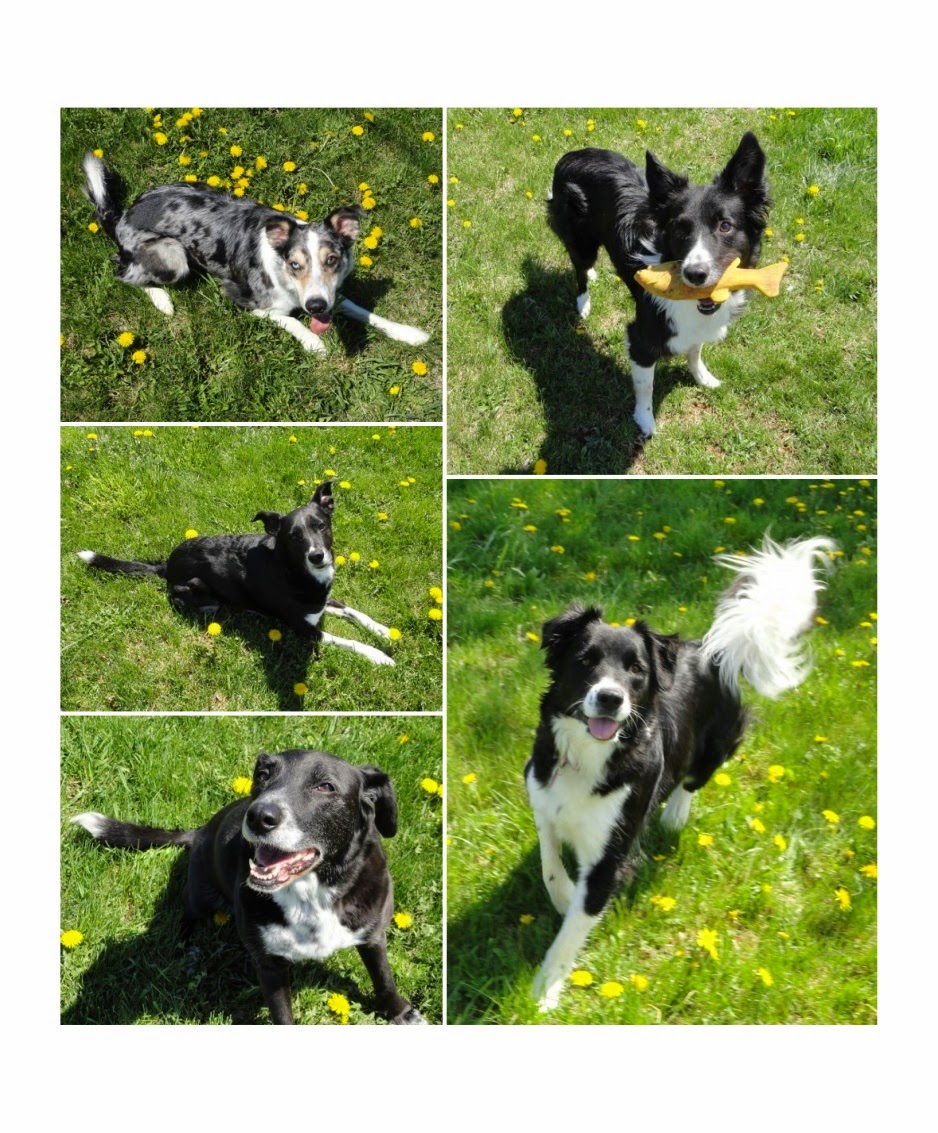 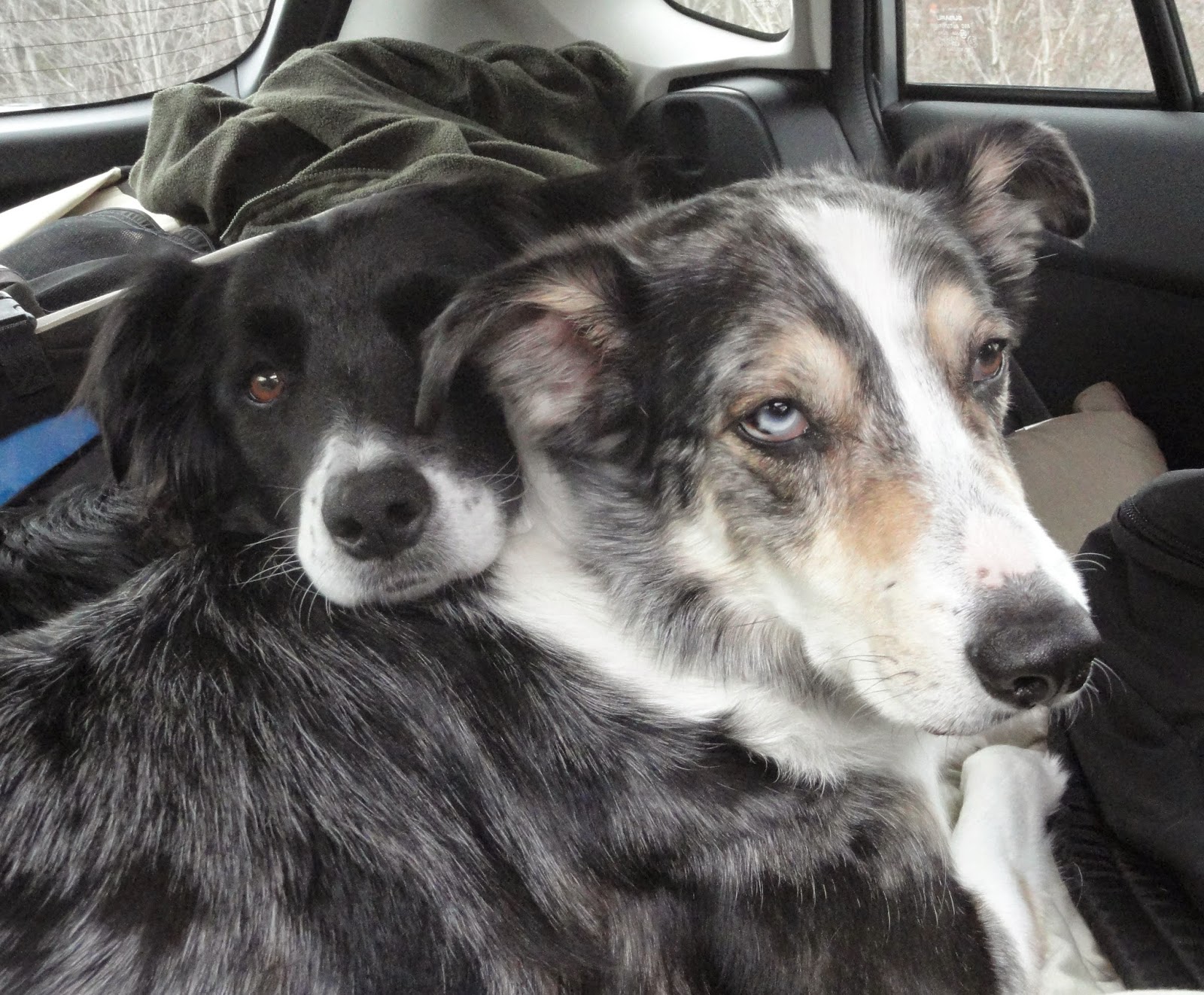 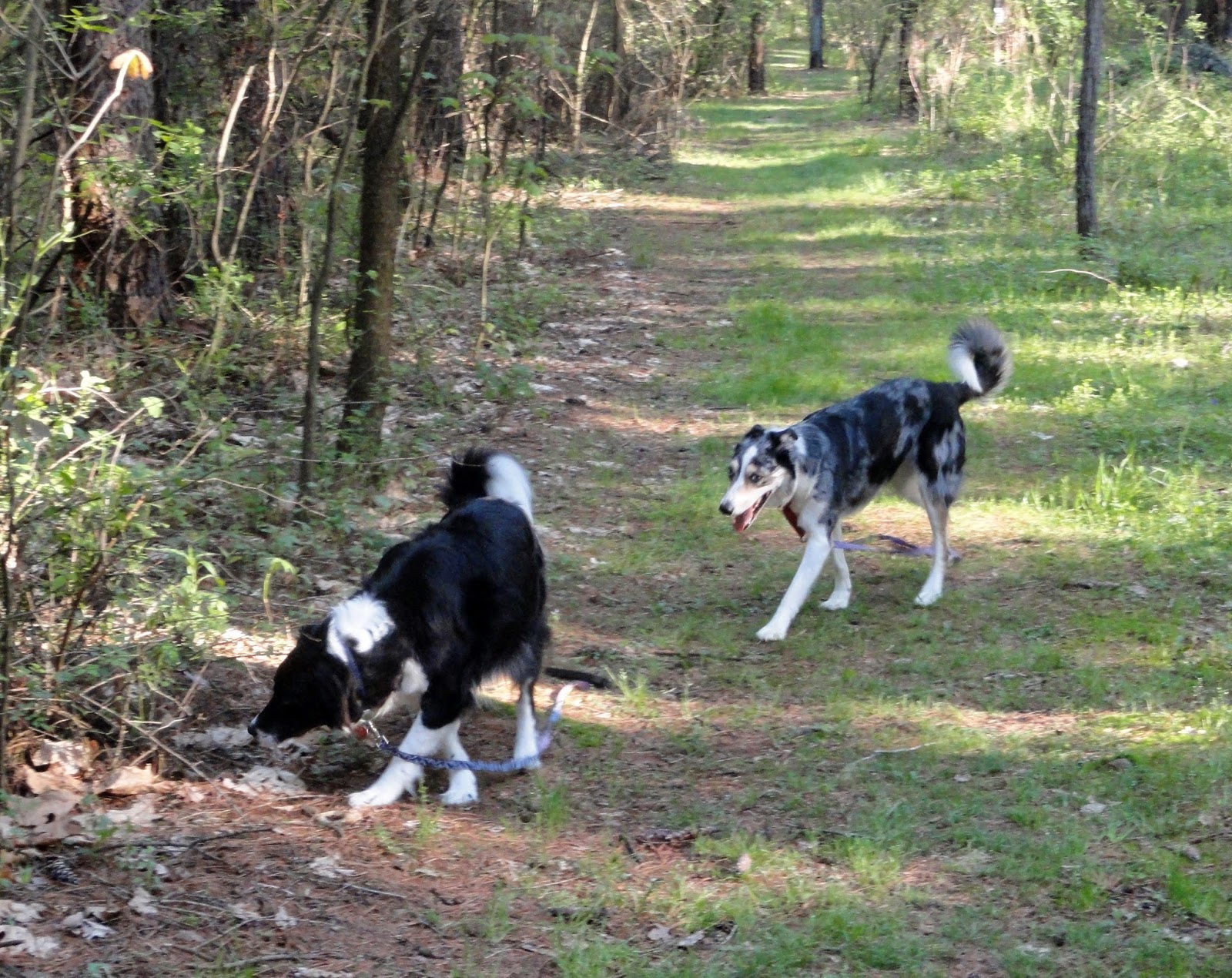 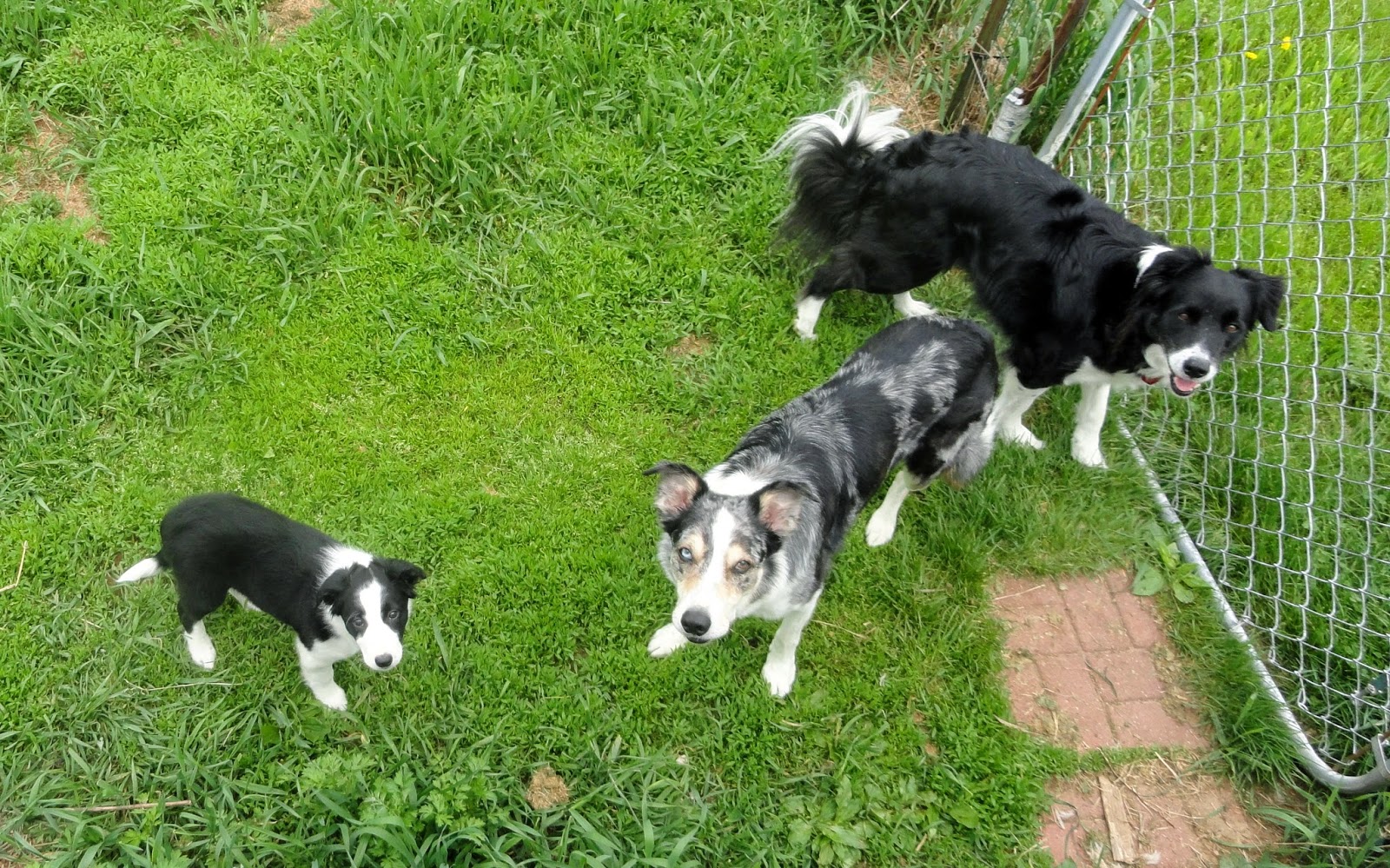 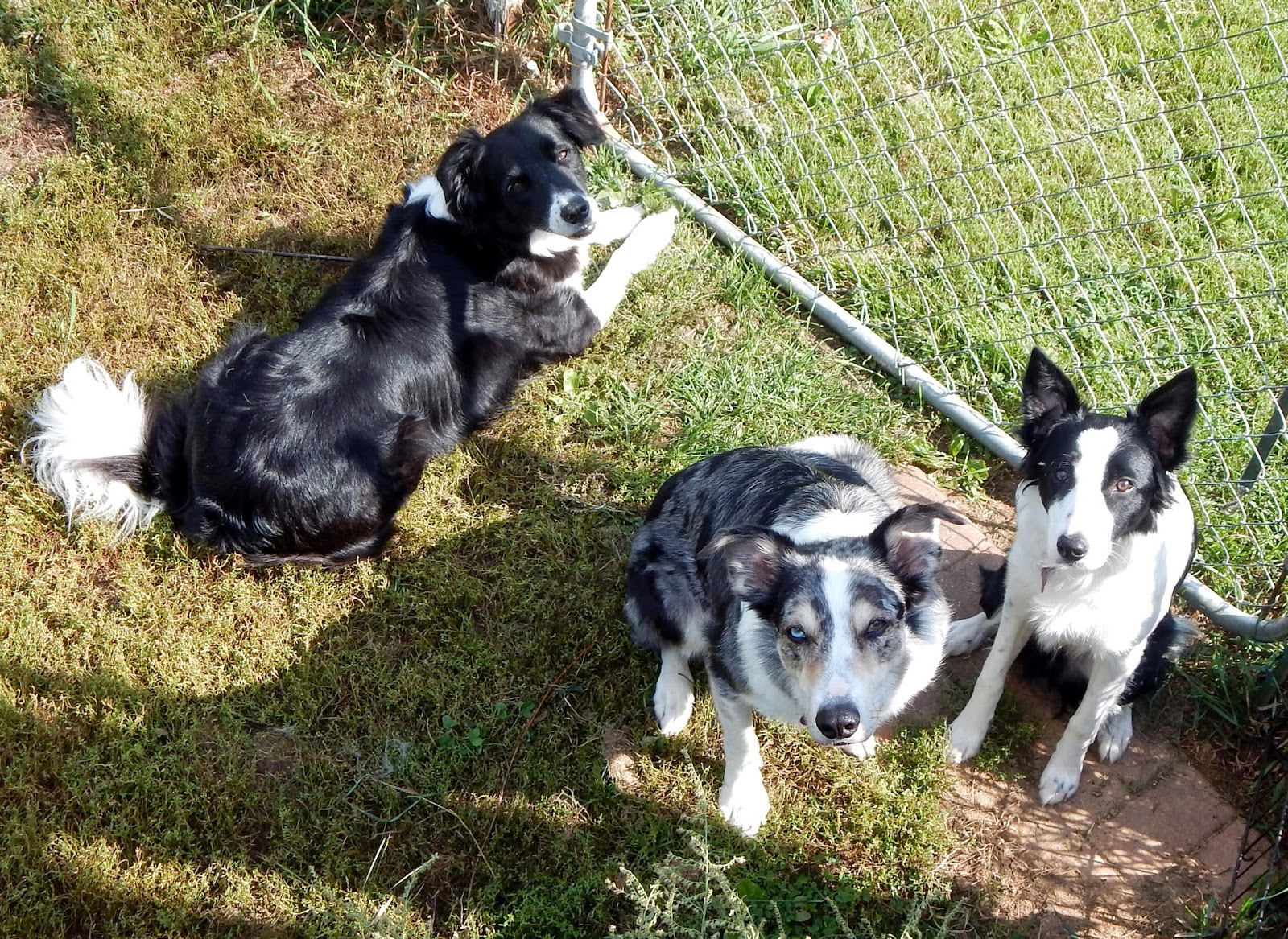 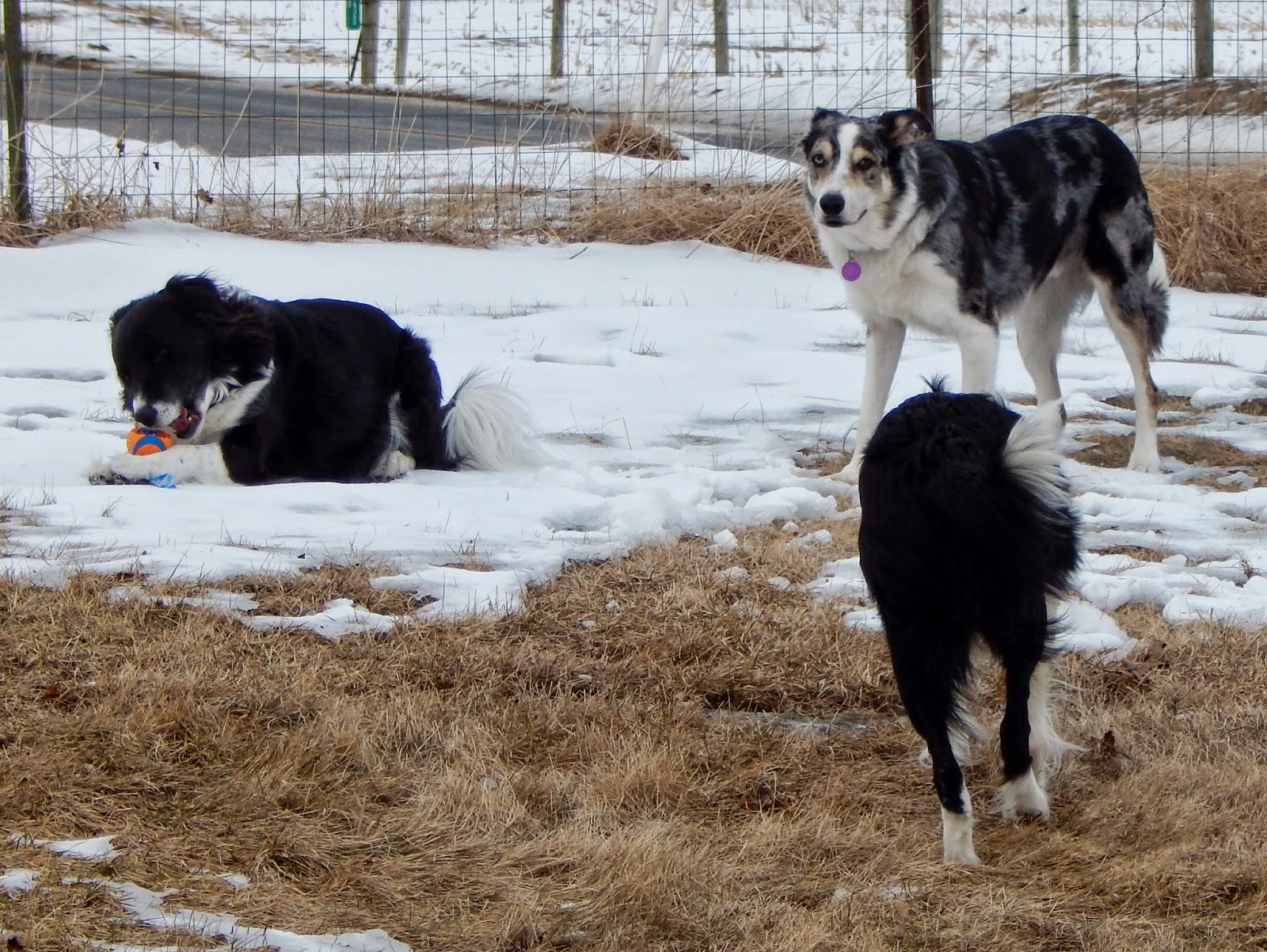 Posted by Kristine at 8:06 AM No comments: