Our trial on Saturday was not exactly the super relaxed fun time that I had hoped it would be.  It was good, but somehow it seemed that Tessa was just a little "off".  She was not her normal sparkly, waggly self.  She was OK - she was in good enough spirits and more than willing to run.  She just seemed uncharacteristically skittery.

There were some thunderstorms in the area.  We did not get a direct hit at the facility, but there definitely were storms around.  That would definitely account for her being a bit subdued since she certainly would sense that in the atmosphere.  Also, we had some stress around the house last week, and it is possible that she was still trying to deal with all that.  Or maybe she was just feeling tired . . . who knows?

In any case, we did have a nice time together, and, aside from being a little pokey and slightly distracted, Tessa ran well.  As always, she put her heart into it and gave me her all, and I never ask for more than that!

First up was Wildcard.  The course started out nice, but ended rather strangely!  Just before the last obstacles - which were actually the last discrimination - there was a set of weave poles, which we would approach coming out of a curved tunnel, and then a jump set back on the side of the approach to those weaves.  Then there was another set of weave poles, parallel to the first, which had a rather difficult approach from that middle jump.  Then, coming out of those weaves, was the last discrimination - a single bar jump near the exit to the weaves (definitely an easy option) and a double set back toward the entry to those weaves (a challenging option).

And if you did not understand a word of that, no worries - I have video!

I elected to have Tessa do a tunnel early on instead of an A-Frame, which meant that we would need to do the more difficult double at the end.  I wasn't sure if my handling plan through the ending was all that great, but we went with it.

Many dogs ran right through that last set of weaves to try to shoot for the double!  Tessa saw it and headed for it, but came right back without even getting hear it!

Coming out of the last set of weaves, I was not set up right to send her to that double.  I ended up kind of leaning in toward her and gesturing toward the double with my opposite arm, and lo and behold, Tessa sent right to the double and took it!!

I joked with some friends that Tessa and I have created a new "International Move" called the "Tesso"!

It actually does not look as odd on video as it felt in real time!

Here is our Wildcard video:

After that we had a short break and then we moved on to Colors.  The course in Colors seemed pretty straightforward, so it was a surprise to me when Tessa spontaneously meandered off course and took a straight purple tunnel!  That is SO uncharacteristic that I was shocked!!  But Tessa never knew it!  When she came out of the tunnel, I called her and we went on and finished.  The ending of that run was awesome!!  A really FAST run down a row of 4 jumps!

That was followed by a longer break, and I took Tessa to Subway and got a sandwich.  Tessa got bits of turkey and pepperoni as I was eating it!

Finally, we ran our Jumpers run!  It went pretty well.  There were two small blips - both totally my handling.  When she came out of a curved tunnel toward the end of the run, I didn't make sure to reconnect before going on.  She almost ran around the next jump, but read my line at the last second and took it.  Then I failed to turn all the way on a front cross and she ended up going behind me!  That time I managed to call her off the purple tunnel and got her back on course!

After that trial, I did seriously consider not entering the Rocky Creek trial in two weeks, thinking that maybe we need to take a bit of a break.  Thing is, we are going to have a good long break after Rocky Creek because there is simply nothing to enter for quite a while after that.

Also, after this "iffy" weekend, I'd like to have a chance at one where Tessa will be happier.

So, I entered - Jumpers, Snooker, and Colors!!  Should be fun!

I am also thinking about other things with Tessa for a while.  I am going to work up a Heelwork to Music routine with her.  I entered her in the Star Spangled Swing at the end of June and we will perform it there!

I would also like to go for our Alternate Advanced Rally FrEe title, do the pre-Bronze Cyber Rally-O Dance Division patterns, and do some Cyber Rally-O with Tessa!

I think the break will do us good.  And then next fall we will really get back into our Agility trialing again. 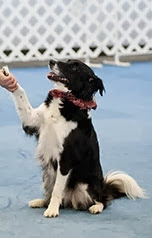