Speedy and I have performed two Freestyle routines that I consider our "signature" routines.  Here Comes the Sun, which I posted about a couple of months ago, and Reunion. 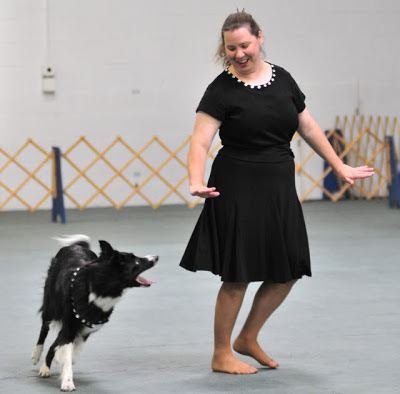 Reunion is a piano piece by Steven Kravis.  The only reason I have even heard of him is because I got a link a good many years ago to an online game called "Bubble Bees".  Bubble Bees had this catchy piano music playing in the background and it was a piece called "Through the Kaleidoscope" by Steven Kravis.  Upon searching iTunes, I found a few other pieces of his that I liked, one of which was Reunion.

Speedy and I had been in Freestyle for three years and we were working on Intermediate.  It wasn't going well.  Speedy was becoming very overstimulated by his own movement and he was constantly going over threshold when he was performing, and he would end up grabbing my costume.  After banging my head against the wall for a year in Intermediate with only one Q, which we actually earned on our first fluke attempt at Intermediate, I knew it was time to come up with a new strategy.

Right at that time, Kamp Kitty offered their very first Rally trial and my friend asked me to enter Speedy.  Even though Speedy was retired, I entered him, and he did a fantastic job.  He even qualified on his Level 2 run - with a jump in the course.

This was his Level 2 run:

I was inspired by this Rally run.  There was something special about it - although it might not be evident from the video, he and I really connected during this run.  It had a certain "magical" feel to it.  I watched it over and over on the video, and I decided to create a Heelwork to Music routine based on some pieces of it (particularly the exercises in the back left corner!).

I chose Reunion as the music, and I sat down and created the routine - or at least the basic framework of it - in one sitting!

From there we went on to develop it a bit, and it was ready to perform for the first time at the Star Spangled Swing in June of 2009.

The performance was a hit!  We got some nice scores and excellent comments.  I had gone very simple on attire for this.  I chose a black skirt and a black top, and I glued some clear rhinestones around the collar of the shirt.  I made Speedy a black collar with clear rhinestones to match.  My intent was to match him, and it worked out really well.

Here we are doing our sidepasses . . . 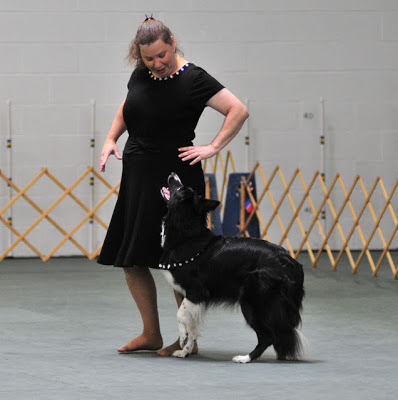 And this was the closing pose.  The kisses were spontaneous!  He really, really enjoyed performing that routine! 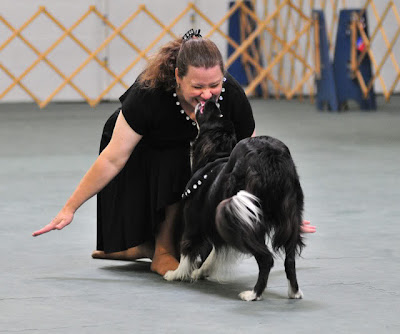 That is one of my all time favorite dancing pictures of Speedy and me!!!  It really expresses what Freestyle has given to us.  It is a very special part of our bond and relationship.

We went on to earn our Beginner Heelwork title with the routine at the last ever Hershey competition, and we were selected for the invitational!  We had been to the invitational once before, with Here Comes the Sun, but this time was even better!  Speedy danced beautifully and we got a ton of applause!  We ended up getting third place and a trophy, earned by audience applause.  And we were in close competition with another participant!  Speedy and I broke out the leg weaves and that sealed the deal!

Speedy and his trophy, and his placement for the performance . . . 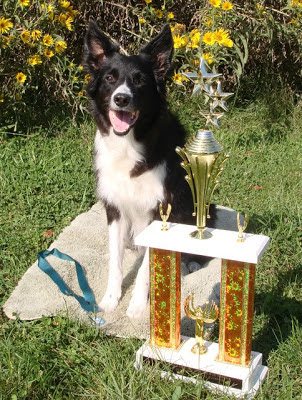 We weren't finished with the routine quite yet, though.  I modified it a bit, added more of the music back and took it into Novice Heelwork.  We earned our first two legs with it at Barkaritaville that November.

Then I really transformed it and we performed it in Pittsburgh to earn his second, and final, Intermediate leg.  Although we never finished that title, it is very special that he earned a leg with it.  The other leg was earned with Here Comes the Sun.  We attempted to earn the third leg with the routine, even once by video, but he was getting older and a lot of his technical skills were deteriorating due to age and arthritis.  We finally retired from WCFO competition, his last performance - Reunion.

But we still performed the routine demonstrations - many at Glen Highland Farm, including at a Control Unleashed camp, and at the fundraiser for canine cancer research.

We did take a break from it for while.  We developed a couple of other routines, and worked to other music.

But last summer I decided to break Reunion out again.  We were going for our Intermediate level of the Classical Freestyle title for the Challenge, and I just thought it would be fitting.  In many ways, our participation in the Challenge has been an opportunity to build a video portfolio of Speedy's best work.  Reunion had to be part of that.

So, back in the very room where we ran the Rally course that inspired this routine, we performed Reunion to submit to the Challenge by video.

"Scallops are soooooo beautiful and synchronized so well with the music phrases.  I think that might be my favorite part of the routine"

"Speedy's positions may not be the most precise ever, but they are beautiful" (I think that might be my favorite comment!!)

Now, I should have left well enough alone, but I ended up videoing this again and I submitted that to the Giving Thanks event in Advanced.  Those are part of the results that I am waiting for now.

In any case, I was very, very happy with the take that we submitted for Summer Fun.  I love this routine, and all of the memories that I have of Speedy with it.