Beginnings are exciting.  There is newness.  There is potential.  There is hope.  There is the joy in every tiny little step and progress and getting to know each other and everything good that comes with beginnings.

Last night I may have looked an ending in the face.  And not one of those "yes, the time has come" satisfying endings.

Dean has been dealing with some kind of hip/leg issue since early December.  He went to the chiropractor, and that helped him a lot, but he has had issues, on and off, ever since.

In everyday life he is pretty much fine, but I believe his Agility career may be over.  He has a hitch in his gait when he runs, and he is not comfortable jumping repetitively - even at low heights.

I'm not 100% certain that this isn't something that can't be fixed, but as of right now I don't think it's looking good.  In any case, a good, long break is probably in order.

Agility has been quite a challenge for Dean and me.  When I started with him, he seemed to have all the potential in the world.  He was a strong, fast dog who enjoyed mental and physical challenges.

Then the noise phobia reared it's ugly head, along with some measure of social anxiety, and everything got turned upside-down.  His phobia was triggered by the slam of the teeter - more when other dogs slammed it than when he did.  He got nervous in front of people when he was running.  Thunder, gunshots, fireworks, slamming camper doors, etc. have derailed many a good effort.

But he has progressed really far with those things.  He has had just a few brilliant runs.  He has enjoyed a good many that weren't brilliant.  And we have come away from difficulties and moved forward.

He has learned to enjoy the game and he loves going to class.  I hate to see that end for him. 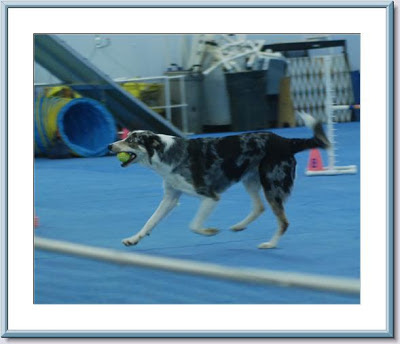 Maybe there is a way that he will be able to come back, but I'm not sure.  For today I have to look at what we have today.

I've already made arrangements to put him in Rally FrEe next session.  Tessa is not going to be a happy camper, as that has been hers, but she will deal.  She will still go, too, but she will have to share the class.  I think Dean will really enjoy it, and it is a chance for him to use his skills, get out and train, and maybe move on to something new.

I know I'm always going to look back at Agility with Dean as one big series of "could have been's", and honestly, I think that would be the case if we had 20 more years to run.

Still, I hate to see it end.

One thing for which I am deeply appreciative - Dean will always be my ARCH dog!!  Nothing will ever change that!  And yes, of course he and I can do more Rally, which he will absolutely love.

Once again, I am so very grateful for Tessa.  I don't know what I would do without her.  She and I are still very near the beginning of our ride together, and I will treasure that as long as I can!
Posted by Kristine at 10:44 AM