Often we speak of motivating our dogs, but at times it can be beneficial to reflect on what motivates us, the human partner of the dog and handler team.  What leads us to choose to train, to compete, to work toward goals, to work through the challenges that are inevitably thrown our way as we progress through levels, titles, goals, etc?

In this post, I would like to reflect a bit on my own motivations for choosing to take part in competition with my dogs.

Looking back I have to say that I did not have a clear reason for entering my first competition.  Speedy and I had been attending Rally Obedience classes, really just for enjoyment and a chance to take classes together.  He had been severely reactive and we had spent a good bit of time helping him learn to interface with the presence of other dogs in more appropriate ways, and he and I were once again enjoying the experience of being in classes together.  Competition was not even on the radar.  After a couple of sessions of Rally, some of my classmates were entering a competition, my instructor thought that I should enter Speedy, I wondered what it was about, I knew it involved dogs and that made it interesting to me, so I entered.

Going into my first competition, I did not know what a leg or a Q or a title was.  I really did enter just to see what I would see.  I learned those terms in discussion with others at the event.  By the end of the weekend, even though it had been incredibly difficult in many ways, I was hooked.

At first I was intent on trying to meet little goals, always keeping Speedy's needs and limitations in mind.  At the first event, I set a goal to go back on the second day just to try to qualify.  We had NQ'ed on flukes and my inexperience on the first day.  Then, at our second trial, the goal was just one title.  The idea of earning a title with Speedy, a dog who had not even been able to be in a class with other dogs just the year before, was too amazing for words.

After our first title, I'll admit, I let it go to my head.  At that point, what I wanted became the driving force behind my pursuit of competition.  I wanted placements, I wanted titles, I wanted to prove that Speedy could be the most amazing dog on earth (irony - he already was extraordinary and I didn't have the sense to recognize his truly amazing qualities!).  That drive led me to treat him in ways that I am not proud of.  I became more focused on his performance than helping him to be confident and comfortable.  I ignored his fears, believing that doing so would somehow make him get on board and want to be "great".  I ceased to pay attention to his needs and I made my own goals primary.  I considered is "issues" to be "problems" that had to be "fixed" so we could earn accolades.

In the end, that backfired in a big way.  I had my "top of the world" moment on the day he earned a first place, earned his Level 2 title, and completed a Stand for Exam in competition!  The very next day it came crashing down - because I was focused too much on myself and not enough on his needs at the trial the day before.  It was a big setback.  The biggest I can ever recall having with any dog I've worked with.  And it really was my own doing.

As Speedy and I slowly rebuilt his confidence and trust in me (which I had rightfully lost) and we began to explore a brand new sport together (enter Freestyle), I finally got the message that, for Speedy and me, competition could not be solely about what I wanted.  Sure, I could work toward progressing through the levels, mastering challenging skills, and overcoming challenges with Speedy.  But if Speedy and I were going to make this competition thing work, it had to be more about him than it was about me.

Freestyle was fantastic for this.  I could even design his routines with his strengths, abilities, and comfort level in mind.  We never looked back and we had an amazing ride from that point forward.  There are some title goals that he and I never met and that's OK.  I am fully certain that Speedy met his full potential.  And, in the end, Freestyle became something that gave him a great deal of joy, and it enhanced the overall quality of his life.

Through competition, Speedy learned confidence in a way that he never could have in our own backyard.  Yes, we could have danced in private, and that would have been fun and he would have benefited from it physically.  But the joy that he experiences when dancing in front of an audience, getting to feel those eyes on him and learning that he was safe and could let go and be himself, and being out and about together in new and different situations all worked together to help him become the dog he is today.  And the only word I can use to describe him now is "joyful".

There were times when I wished I could have aimed for the highest level of WCFO competition with him, but I always chose to keep in mind that Speedy's needs and well being must come first.  I am pleased that he will have the chance to be a champion through the DCD Challenge.  But the look in his eyes when we go out and about in the world together will always mean more to me than any title ever could.

So, along comes Tessa and she truly did, as I have often said, get the handler that I wish Speedy and Dean could have had.  I didn't make Tessa take part in sports, I invited her to do so.  And she accepted, put on her most beautiful ballgown, and became my princess sport partner!

Tessa and I are still working to build some of the precision that we will need, but she gives every competition performance her all.

The best part about competing with Tessa is actually when we get home.  For the entire rest of the day, after coming home from any competition, Tessa's eyes are lit up with joy.  She prances, preens, invites the other dogs to play.  She really is, I believe, the dog she would have been all the time had I had the opportunity to raise her myself!

Over time she is becoming that dog more and more at other times, but competition always jump starts that attitude!

With Tessa I can compete for her and I can compete for me.  If I go out there thinking, "let's try to qualify", Tessa's demeanor screams, "YEAH, LET'S GO FOR IT!!!!"  The first few times we did this, I was astonished.  I honestly never have competed with a dog like her before.  It is breathtaking - for both of us.

So, my motivation for competing in dog sports is greatly mixed.  There certainly is an element of my own goals.  But there is also, always, an element of "how can I use this to make my dog's life better?"  I do love the pretty ribbons.  But I love the dogs who earn them so much more.  Some of my favorite competition memories are of performances (in Agility, Freestyle, Rally), were we did not qualify at all!  The time Dean slalomed all of the jumps in a Jumpers course with a look on his face of, "Wow!  Check THIS out!!!"  The time Maddie came bursting out of a tunnel, saw a crowd of people, stood and wagged her tail at them, and went on with the course far to late to make time!  All the times Speedy was an absolute nut, but he entertained the audience in a way that they remember years later!  And Tessa's second attempt at a Snooker run where she took an off course tunnel and then took every single tunnel she saw on her way across the field to get to the table, prettily hopping over the last one after going through it!

Why do you compete?  Feel free to share your thoughts in the comments! 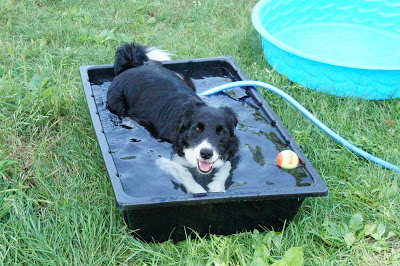