I really was intending to quit Rally with Dean after earning our ARCH.  At least, I was going to quit live competition and APDT.  I always intended, and still intend, to take him through all 5 levels of Cyber Rally.

The ARCH was one of the ones that got away from Speedy and me and it really was my only Rally goal with Dean.

But . . . . the effect that going to that trial had on him is making me think again.  He and I totally re-bonded after that trial.  He has been my buddy ever since.  He is snuggling with me every morning, following me around the house more.  In a way he and I haven't been like this since Tessa and I got into training together.  It's not that I've neglected him or anything.  We play every day, and he still gets training sessions, and he goes to Agility.  But something about this was apparently different.  It must have been something that he and I both missed.

I was going to walk away because she wants competition more than he does.  But if it was a positive enough experience for him that he and I have been that much closer since the trial, maybe the time to stop has not yet come.

In order to be able to do Level 3, Dean will need to learn the following:

Also, we really need to shore up a few Level 2 Exercises:
All very do-able.  He should be able to retrieve if we use a tennis ball, so I think we are good with just about everything else.

Kind of a fun challenge.  Maybe we will be ready in time for the Kamp Kitty trial in April.  We can shoot for it, anyway!  Dean should have plenty of time to finish this before the complete Cynosport takeover.  After that, we will just have to see what changes end up being made . . . .

On the first Saturday of this month Tessa completed her Novice WCFO Freestyle title.  We had abandoned the Scottish routine that we were using over the summer, and we went back to Scorchio.  In order to up the technical level, I added in her pedestal (covered in sparkly purple fabric) so she could do her pivot moves.

I was hoping that we would do our best live competition performance, and we really did.  Tessa nailed most of the moves in the routine.  There was one section that kind of fell apart in the middle and she very obviously missed a jump at the end, but other than that, it really, really good!!

It scored higher than any competition performance we had done before with an 8.3 technical and 8.4 artistic!  That's not far off from what we need for Intermediate.

I am very pleased with our progress.  A year ago we didn't even have a routine and she knew very few moves.  Now she is proficient at several key moves, many more are coming along, and she just loves, loves, LOVES to perform!  Check out her adorable tail!

We also got a second place for the performance!

It was wonderful to spend the day with Tessa.  I still revel in the fact that she is a dog who can hang out in the building all day, in her crate, and she has her head to perform when it is time.  She doesn't care if dogs bark or pass close to her, she doesn't care if things bump or bang!  There was a young girl at the competition, maybe about 9 years old, and Tessa looked at her with some worry a few times, but once she figured out that the girl wasn't even going to look at her, she thought nothing more of it.

We went for many walks out in the beautiful fall day, and she accompanied me in the car when I went off site for lunch.

But most of the day was spent side by side, Tessa in her crate and me next to her, either on my chair or on the floor.

I love being able to watch the other competitors and really take in the whole experience.  Tessa seems to enjoy that, as well.  She actually watched a few of the routines!

It really was a perfect day.

Upon return home, of course, we did her traditional ribbon photo. 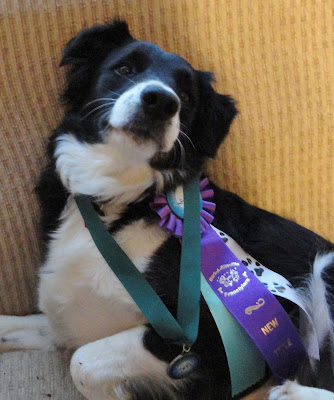 And what a way to finish out our very first competition year together!  Congratulations to . . .

I am very much looking forward to the year to come.  Intermediate - we are SO going to conquer it together!!!
Posted by Kristine at 9:26 AM No comments:

This past weekend, Dean accomplished something big - his APDT Rally Championship Title, or ARCH.

Dean got into Rally years ago when I was working with Speedy on his Veteran's titles.  At first I took Dean along just because he didn't like to be left home when I want off to competitions, but he actually enjoyed Rally and he turned out to be quite good at it!

Earning these QQ's was a big deal to me.  It was something that Speedy and I tried to do for a long time, and he was never able to earn a single QQ.  Because of the frequence of jumps in Level 2, he rarely qualified at Level 2, and when he did, his score was never 190.  The closest we ever came was a 189 in Level 2, along with one over 190 in Level 1.

It was not for lack of training or work.  Speedy's brain just didn't mesh well with the structure of Rally.  He ended up overstimulated more often than not, especially in Level 2.

I ended up giving up the idea of earning an ARCH with Speedy when we got seriously into Freestyle.  It was evident that he loved Freestyle much more than Rally, and I was able to use his creativity and artistry in that sport.

So, when I knew that Dean had it in him to earn the ARCH, we set out to do it.

Dean did qualify in every QQ attempt, with scores about 190.  He finished up the points by the time he had his 3rd QQ.  But it took me a while to get him to a trial to finish this out!  We were signed up for this very November trial a year ago, but I got very sick and was unable to go.  There was another trial in April, but I elected not to sign up because I wanted to do Agility and Freestyle with Tessa right around that time.  There was another on Labor Day weekend, but it is still too hot to crate Dean out of the car at that point.

So, this was it!  Our chance to try for the long elusive ARCH title!!!

When Saturday rolled around, I was not really in the mindset in which I wanted to be.  Two weekends ago, Tessa and I did Agility at Periland, and then last weekend was our big Freestyle competition (which I need to write up here!).  I could have used a week off before trying for this, but we didn't have it.

But I got up on Saturday, packed Dean up, and off we went!

He was very unfocused in his first run.  He wanted to go visit the judge.  He wanted to explore the building's walls!  His brain was just not with me!  We actually had to back up and re-try a 180 degree left turn because he was just meandering forward!

Still, he managed a 206!  He rocked his stationary exercises!  I was more than pleased, but was really wondering if it was right to make him go out in front of people to try to earn this title that I know full well is something that I wanted for myself.  I hate to leave a title unfinished, and this one was just too big to leave undone!

When we went out to do Level 2, my Dean Dog was back!!  He was focused, he was eager, and he stayed with me perfectly.  He was a little concerned about the crowd, but he was better able to process that, and he did an awesome run.  We got a 209 and that was 5th place!

That goes to show how excellent most of the Rally teams at this event were!  Our 206 in Level 1 was nowhere near 5th place!  And with a 209 we just snuck in with 5th!!

And while placements are not something that I deliberately try for, knowing that Dean had performed with excellence among some very, very solid teams, made me feel much better about the fact that we were doing this.  He seemed to enjoy the second run.

I realized afterward that I really haven't done any work on Rally with Dean.  We have been training Agility, and a little Freestyle, but really no Rally.  We should have been doing training walks for at least a week before this trial, and I should have been running him through various exercises weekly for several months leading up to this.

I must not neglect Dean's Rally after this.  He has so much talent, and such great skills.  It would be a shame to let them go.  I am hoping, after this, to get more into the Cyber Rally with him, so we can use those skills that he loves to perform.

From a mental point of view, Sunday was a challenge.  It was hard to stay on an even keel when I was as excited as I was!  I must have done OK with that, though, because our Level 1 run on Sunday was perfection!  A 210, which I have never earned before!  Speedy earned a 203, which was a perfect score under the scoring, before 210's were possible, but I never had gotten a 210!!

So, that's that!  I finally have a dog with a title that goes before his name!

And I am pleased that Dean is the one who earned that first.  There is so much that he and I had to give up because of his noise phobia and anxiety issues.  This is one sport where he was able to shine and he deserves those letters in front of his name. 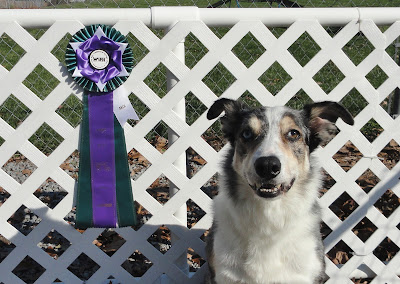 A friend requested a photo of him with all of his ribbons for the weekend.  It was clear to him that being on a blanket with all of this "stuff" was a cue to begin a multi-body part targeting exercise . . . . 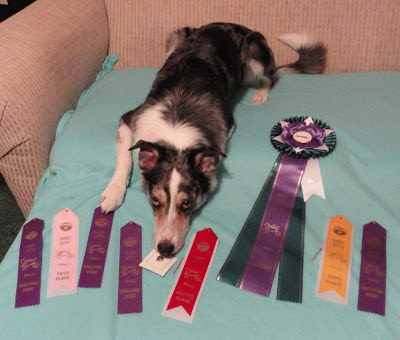 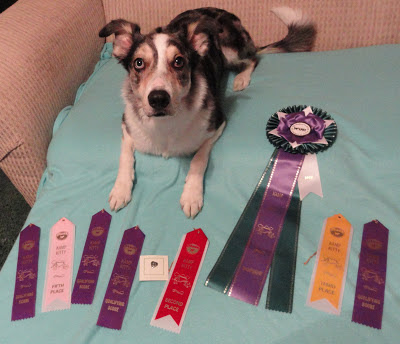 And, we tried a Tessa-style ribbon wearing photo.  Ummmmmmm . . . definitely not Dean's style!!  He had to Dean Dog it up!!! 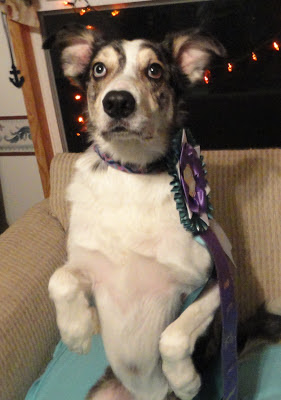 And I am especially pleased that we did this while APDT Rally is still APDT Rally!  No matter what changes come when USDAA takes over, Dean and I will have done this in APDT Rally.