Six months ago I made a decision to stop all work on verbal cues with Bandit, and focus on attitude, focus, and bringing enjoyment into our training together, especially our Freestyle training.

That was one of the best decisions that I have ever made!  Since that time Bandit and I have truly started to know one another as training partners.  Our communication has improved, and our enjoyment of training has skyrocketed right through the roof!

And now we are at a point, with certain behaviors, where we are ready to start working on putting some of his trained behaviors on verbal cue.

I think that some people got the impression, when I made the decision to put all verbal cue training on a six month "hold", that I am against the training and use of verbal cues.

That, actually, is not the case.  With some dogs, in certain contexts, there is a time and a place for the use of well-trained verbal cues.  In addition, there are dogs who respond very well to verbal cues - with clear understanding and enthusiasm.  For those dogs, the use of verbal cues is perfectly appropriate.

What I am against (for myself) is approaching the discipline of Canine Musical Freestyle as an exercise in the performance of trained behaviors on verbal cues to music.  When one of my dogs and I perform a Freestyle routine, we are creating art together.  Freestyle is a form of expression - of who the dog is, of our bond, and of the joy that we find in the performance.  It is not a display of verbal cues.

That said, again, there is certainly a time and a place for verbal cues.

Since I do not want to fall into the same mistakes that I made, both with Tessa and Bandit, when I tried to train verbal cues in the past, I have come up with a detailed plan for our work with verbal cues.

1. I will not take on a "stiff" demeanor because we are working on verbal cues.

I will strive to always keep my body language "loose" and natural.

2.  I will ensure that each behavior that is to be put on verbal cue is being performed consistently with strength, understanding, confidence, and joy on physical cue before making any attempt to put that behavior on verbal cue.

3. When working on verbal cue training, I will approach it as a game.  The introduction of the verbal cue is simply a new twist to the game.

5.  I will use verbal cues that Bandit already knows to work on the concept of listening for cues:  Whiplash Turns, Releases to Hand Touch on verbal, Releases to Leg Weaves on verbal, Spins and Twirls in center position, and Splat Downs.

6.  When putting a verbal cue on a new behavior, I will use a "food anchor" to help Bandit first listen, and then respond.  In addition, I will support his movements and choices with my eyes.

7.  Once Bandit begins to respond correctly and consistently to new verbal cues, I will have him practice by working on opposite behaviors in the same training session, and we will play "find the cue".

8.  Once Bandit knows a small selection of Freestyle behaviors on verbal cue, and he is performing those behaviors consistently, and with understanding and joy, we will introduce verbal cues into simple movement phrases.  I will remember to keep my arms and body language "loose" and natural.  No stiffness!

9.  I will remember though all of this that verbal cues are a tool.  They can be used selectively to enhance our dances.  We are not showcasing verbal cues - we are showcasing Bandit and our dance.

I am not striving for Bandit to "do everything on verbal", but to be ambidextrous - equally able to perform behaviors on obvious and supporting physical cues, and on prudently chosen verbal cues.

I will remember this!

I am excited about this because I believe that Bandit and I are really ready to take this challenge on at this stage of our work together.

It will be an adventure, not an obligation.  Perfect! 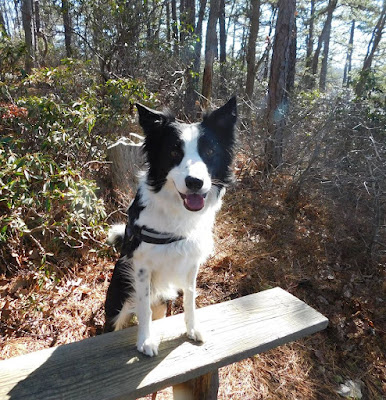