Ever since we moved to this area in 2003, hiking with dogs has been a favorite activity of mine.  Sometimes Ben and I would take Sammie, Speedy, and Maddie to Colonel Denning State Park and hike the Nature Trail with them.  Maddie and Sammie would actually cross over the creek on large fallen logs, and we used to enjoy calling them back and forth over those logs! 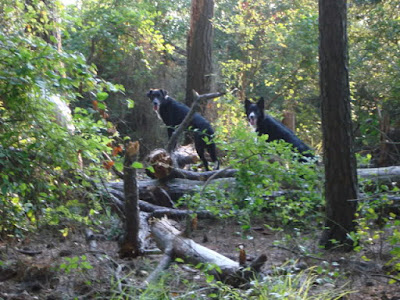 
Speedy always seemed happiest in natural spaces, especially the woods.  Whether we were at one of our nearby State Parks, or at the Ecological Preserve down the shore, or at Glen Highland Farm, he seemed the most confident, the most whole, and the most at peace in wooded areas. 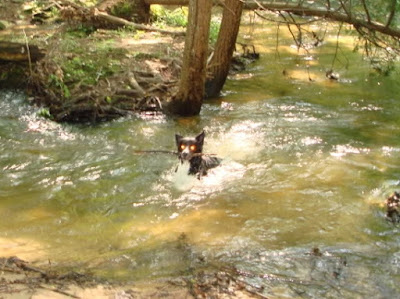 One of my favorite pictures of Speedy enjoying the Nature Trail at Colonel Denning! 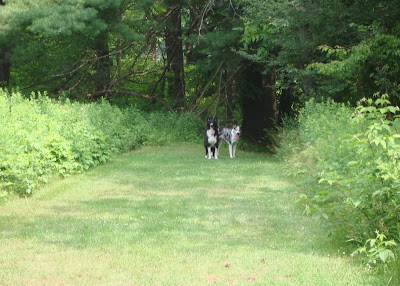 Speedy and Dean Dog eager to get into the woods at Glen Highland Farm!

And when Tessa came along, I found the same thing about her!  The first couple of times I hiked with Tessa, I was amazed with the joy and wonder in her eyes as she would gaze away from the trail into the trees around her.

As Speedy got older, and I became very interested in giving Tessa good quality exercise as my Agility partner, I began to take most hikes with Speedy and Tessa.  I called this little group "The Walking Club".  Sometimes we included Dean, but most often it was just the three of us together.


All of this changed when we lost Speedy.

When spring of 2014 came and Tessa and I set out to enjoy our favorite trails, the experience felt like I had a deflated balloon inside.

Tessa and I did continue to take our favorite hikes, and I always enjoy them to some extent, but without the other member of our "walking club", the experience was always lacking something that I had loved. 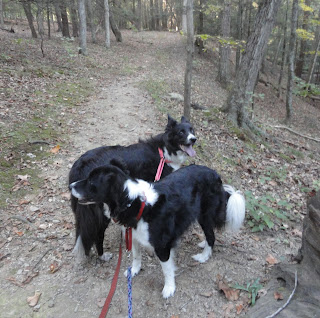 "The Walking Club" - Speedy and Tessa 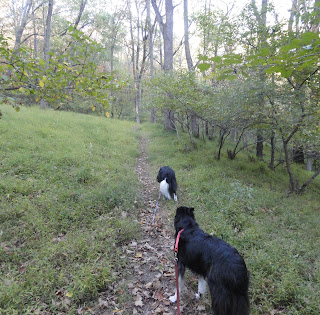 
I hoped that including puppy Bandit in our "Walking Club" would restore some of the joy that had been lost, but that did not happen.  As a baby dog, Bandit was not really ready to be a hiking partner.  And, Tessa did not really seem to enjoy Bandit's company on these walks.

We still went out and about from time to time, but I found that my interest in hiking with dogs seriously waned.

That was, until last summer, when everything changed.

Of course, last summer we began our involvement in Canine Parkour.

I distinctly remember the first time I packed up my camera and tripod and a bag of chicken, and set off into the woods to film Parkour Interactions with Tessa.

To my great surprise, I found that going out into the woods with Tessa felt right again.  Once again, the Watershed trail was beautiful, and Tessa and I were walking along with a shared sense of adventure and purpose.

Stopping to have her interact with various objects was different, and Tessa did seem a little confused at first, but she got right into the new game, and she and I have never looked back!


This is the very first Parkour Interaction that Tessa and I ever filmed together!

When Tessa and I started going around filming our Parkour entries together, I found, very much to my surprise, that the distinct feeling of something being missing vanished.

Not that I forgot about Speedy!  I always think of him when Tessa an I are out on a trail together.  But somehow it was almost like his heart and his spirit were again with us. 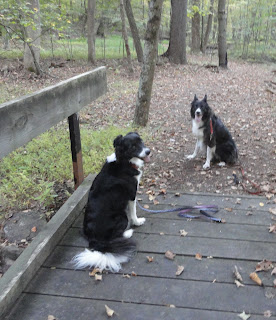 Tessa and I had no idea how important these bridges would become for us someday!


Lately Tessa and I have been working hard on the Grand Champion track in All Dogs Parkour and we are currently in Level 4 (out of 5).  This has been a worthy challenge for us!  Some of the skills that Tessa has needed to master to be able to Q at this level on this track have not come easy to her!

I actually did not plan this deliberately, but the location where we filmed our third submission toward our Level 4 Grand Champion title turned out to be . . . . the Watershed Trail!

And what a cool adventure it turned out to be for us!

I took Tessa to the Watershed Trail back in March to do some filming for an online Parkour class that I have been teaching.  I found that after a long winter of low activity, we were both completely out of shape and out of practice!

We managed to get a couple of Interactions filmed, including a sequence that was really cool, but that it turned out that I could not use in our submission.

I decided after that to put filming at the Watershed Trail on hold, and we filmed at Willow Mill Park instead.  That turned out to be something of a difficult entry to film.  At Level 4 Grand Champion, we needed to include four different Advanced Interactions, and a 5 Interaction Sequence!  Tessa struggled a bit with the Sequence, and we needed to visit the park several times over the course of about a month before we were able to complete our submission.


I considered going back to the Watershed Trail at that point, but I happened upon another location with Bandit - the White Oaks Trail - and I decided to film there with Tessa instead.

That entry turned out to be very straightforward to film, and Tessa and I managed to complete the whole thing in just two visits to the location!  We even took a bit of a side trip over to the Watershed Trail, which is nearby, on one of those occasions, and we filmed a couple more Interactions there!

The White Oak Trail entry was a Q, as well - two legs down!


After we finished our second submission at this level, I decided to finish our Watershed Trail entry.  By this time, summer break had begun and I had plenty of extra time to get there with Tessa to film.

Tessa and I set out on an overcast day and I had the goal of walking the entire Watershed Trail loop - which is about 2 miles total - as we filmed some Interactions!

It started out as a beautiful day, and it was a lovely hike ... at first! 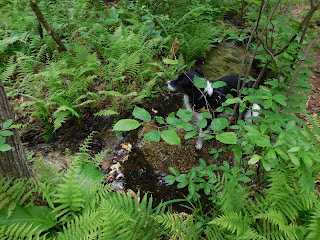 Cooling off in the creek in between hiking/filming

With about 1/4 of our hike left, it started to rain!  It was a light rain, but Tessa was none too pleased!  She started making a beeline toward the car, making exactly the right turn at each place where the trail split!!

By this point we had filmed almost all of the Regular Level Interactions that we needed, but we still had to film our four Advanced Exercises and the Sequence, which were the most difficult components of the entry!!

Since one of the Advanced Exercises that I had planned was Advanced Novel Uses, which consists of seven Interactions in and of itself, I decided to break those up and visit the location at least two more times.

And so, on another overcast day, Tessa and I returned to the trail.  I hoped to film Trick on a Platform Small, the Sequence, and possibly a couple of Interactions or Advanced Novel Uses.

We did get the first Interaction filmed (although I ended up re-doing it), but as we moved toward the area where I planned to try a sequence, there was a sudden clap of thunder!  I didn't even know there was thunder in the forecast!  Fortunately, we were not very far from the car, so we headed right home!

At this point, filming at this location was starting to feel a little . . . . drawn out!  Granted, I love the location, and I was enjoying our frequent trips there.  And I was very pleased that Tessa wholeheartedly approved of these ventures.  But I was starting to feel like we were stalling out!

On our next visit, just a couple of days after our session got cut short by thunder, we finally had a "break through" filming session!

We re-did the Trick on a Platform video, and the sequence turned out to be very straightforward to take care of.  Then we went and filmed seven Interactions for Advanced Novel Uses before Tessa started getting kind of tired.  We also had a bit of run-in with a bee while we were filming Novel Uses!  Tessa did not get stung, but the bee brushed against her side and it took a while before she was convinced that it was really gone!

So, now we were down to needing just two more Interactions - Go Around Distance and Get on Send.  And we finished those off today!  To celebrate, we filmed one more Interaction where Tessa and I sloshed into the creek together!  After all, it is the Watershed Trail!

In the end, getting this entry finished felt absolutely wonderful!  It had taken quite a bit of time, and we did a lot of walking and filming, but in the end I find that it is intensely satisfying to finish up an entry that we needed to put so much of ourselves into.

And this one is for you, Mr. Speedy!  Just as you always put your whole heart into everything you did, Tessa and I put our hearts into filming every bit of this entry!  In some mysterious way you are always with us out there.


Now, on to Level 5.  This will be one of the most difficult challenges that Tessa and I have ever taken on together.

And I know we will love every minute of it! 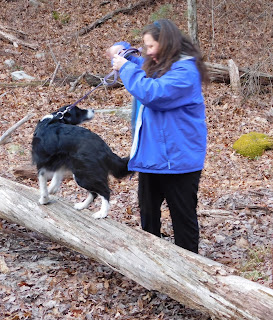