"You're so creative".  I hear this a lot.  Especially in the context of Musical Freestyle.
I don't think I am, though.  Sure, I can come up with ideas, but most of the time I don't take that all-important step of carrying them out.
And then a lot of times I feel like I'm just stuck doing the same things over and over.  Like I haven't come up with an original idea in years . . .
I WAS creative once upon a time . . .

Back when I did Freestyle with Speedy, I was always coming up with ideas - and we carried some of them out.

We danced to "Here Comes the Sun" and I made him a sunbeam collar and I designed the choreography to fit the music.  We danced to "Reunion" and we made it very flowy and elegant.  We danced to "Waltz from Maskarade" and our movement together was truly a dance.

And even with Dean I came up with some original ideas and we performed routines that were truly ours, as a team.
But when I go to choreograph, or design, a Freestyle routine now, I get stuck in putting together the same movement patterns I've been using with my dogs for years!  I just feel like I'm in this enormous rut!
Freestyle is a sport that requires coming up with ideas.  It's not like I can get what I need from someone else.  And, really, I want my ideas to be my own.  Sure I get inspiration at times from watching others - sometimes I see a move or a movement phrase that I want to try with my dog.  But that's not creativity unless I take it and do something with it that makes it belong to my dog and myself.

Also, I'm not like other Freestylers.  I know that turns some people off, but I have never been one to go along with the crowd.  I don't march to the beat of my own drummer - a lot of times I am turning handsprings to the beat of my own marching band playing music that nobody has ever even heard before.  That was true for me in grade school, in High School, and it's true now.
So, my routines tend to be outside the box.  The problem is that they have gotten stuck inside my own box.  I want them to be free . . . !!!

When Speedy and I did this, we did it to suit ourselves.  And now Bandit is leading me down that path again, but in a different direction altogether.
The problem with being different from everyone else is that it is easy to stagnate.  It is easy to fall into a pattern and circle there endlessly.  And then that gets old and tired and I feel like I want to go a different way, but I have no idea which way to go.  Part of me might want to go where everyone else is going, but somehow that just doesn't work for me.  I've tried it and crashed and burned.  So, if I'm not following the crowd, what do I do?

The only thing that has ever worked for me is to let my dog lead the way.  Whatever success I have had in the dog sport world I have had at the times when I have listened to my dog.  I can trust Bandit to help me figure this out.
That said . . . where is Bandit leading?  That's what we have to work together to find out.
Right now I strongly feel that exploring creativity is the next step for us.  How do I find our style as a team?  Only by trying stuff.  Thus far with Bandit I have pretty much done what I have always done.

What is the starting point for something new?  I don't even know.  That is where I am just stalled out right now.  I know that creativity is the answer . . . I'm just not quite sure how to go about becoming more creative.
But I need to think about it, and I need to figure this out.  Bandit and I can't go forward unless we find a direction and head out together.

Hopefully someday I will post a follow-up to this where I say what the resolution was . . . 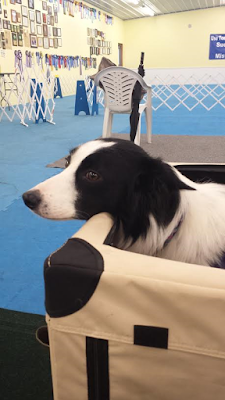