He is not in class with Tessa - he has class first, and then she is in the next class.

But, she is now sharing her Agility nights with Bandit.

It has been many years since I took two dogs to Agility class on the same night.  Years and years ago, Maddie and Dean went to Thursday night class - Maddie in the first class, and Dean in the second.  Then Tessa took Maddie's place and she and Dean shared Thursday evenings.  Eventually they were in the same group together until I retired him in the fall of 2013.

It was particularly easy to have Dean in class with another dog because he had to spend the majority of the class in the car with his music playing.  Because of his noise phobia issues, he could not hear the teeter bang, nor could he hear other dogs drop bars, so he was only in the room when it was his turn.  I could easily pop the other dog in the car while he was running, so I only needed one crate set up for one dog.

Not so with Bandit.  I can keep him in the car, but I prefer to keep him closer when possible.

So, before class, I needed to freeze Kongs for the two of them.  I also froze one for Dean so he would have something to entertain him while I had both of the other two dogs at class.

When I arrived at class, which we did have outside last night, I set up two crates - one for Tessa and one for Bandit - right next to my car.  After we were settled, I took the two of them for a walk together.

Bandit was clearly as pleased as punch.  Sometimes when we are at class, and I am out walking him, he seems a bit nervous.  Not with Tessa there.  He was very obviously thrilled with this situation.

When it was close to Bandit's turn to run, I gave Tessa her Kong and zipped the top of her crate shut, and I warmed him up a bit.  She was quiet, and seemed perfectly content to enjoy her Kong while I did my thing with him.

We started with a sequence of a tunnel to a serpentine.  I started out with the same trepidation that I usually have when I look at a sequence and try to figure out exactly how to handle it with him.  After trying it one time, our instructor gave us some pointers, and after a few tries, he ran it like a pro!  He was confident, kept the bars up, and - best of all - he was plainly enjoying every second of it.

In fact, Bandit was so happy, he was acting a bit silly out there!  Before we started the sequence, he would run around a bit - run toward the dogwalk - and then come back and run.

I am actually really glad to see this.  Once he was engaged in a sequence, he was totally focused on it, but in between he wasn't worried.  Just thought it was party time!

Then we worked on the dogwalk a bit.  His attitude on the dogwalk has turned around completely - he used to avoid it and now I can barely keep him away from it!

We tried to work some weaves with wires, but his brain was a bit fried at that point, so we ended there.

Next turn we focused on the weaves, and he ended up going through 12 weaves, wired, focused, intent on what he was doing.  Love seeing that!!

We ended by working the sequence of two jumps with the jumps raised to 20 inches, which will be his jump height.  He rocked it!

That ended Bandit's part for the night, and now it was Tessa's turn.  Another thing I will need to remember is to walk the two of them together after Bandit's second turn, so Tessa gets a bit of time out of the crate before I need to warm her up for her class.

This two dog thing is a learning curve!

When it was Tessa's turn, this time Bandit got his Kong.  I was pleased that he settled right down and enjoyed it.  He did not fuss over the fact that I was running Tessa at all.

I was absolutely shocked when I got Tessa out there.  She ran like she has never run in her life.  She was running FAST!!!

At one point she flew ahead of me over two jumps, and took the A-Frame at full speed.

I honestly don't think I have ever seen her do that in her life!  I didn't even quite know what to do with it!

It was fun running her like that!  I guess a little competition from her pesky little brother might be a good thing for her, although I expect that effect to wear off as she starts to get used to him being with us.

After Tessa's turn, I did walk the two of them together.

Bandit didn't do so well with staying quiet on Tessa's second turn.  I gave him his Kong and zipped the top of his crate, and he started to yowl, so I ended up putting him in the car.  But once in the car he didn't fuss at all, which was very good.  He could still see us plainly from the car, so that was a big step.

After class was over, I had to tear down both crates and pack up everything.

All in all, it was an excellent night.  I really enjoyed working with Bandit and I know this is going to be very good for him. 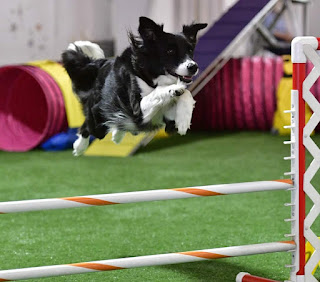 Tessa:  That whippersnapper will never jump like ME!!
Posted by Kristine at 8:32 AM