On Sunday Tessa and I earned her C-ATCH!

I am beyond excited and overjoyed and proud of my girl!

To have come from where she and I started makes it all the more satisfying!

And Tessa had fun every step of the way.  She loves Agility.  She adores trialing.  She enjoys training.  And she loves our "girl's days"!

Last week was surreal.  I thought about very little other than the upcoming trial.  We needed one Wildcard and one Snooker.  We would compete in Wildcard on Saturday and then Snooker on Sunday.

I knew that we were perfectly capable of qualifying in both games.  But . . . you really never know.  Anything can always happen!

I tried to be normal and be involved with other things, but I could hardly get my mind away from what Tessa and I were going to attempt to do!

Finally, Saturday came, and we were off to Periland!  I was very grateful that I had decided to scratch Jackpot altogether when I added Snooker to our entry.  I actually think I would have enjoyed trying our hand at that Jackpot gamble, but some other time!  I was also very glad that I did not have to get up early and rush.  I was able to sleep a bit later, and Tessa and I took our time getting to the trial.

Our first run of the day was Standard.  That went well.  I made a handling mistake that cost us the Q, but it was actually an extremely fun run.  Tessa did some really nice stuff!

I was glad that if we were going to NQ on anything it was this Standard run, since we had all the Standard we needed for our C-ATCH!

I considered every different combination possible, and finally decided on doing the further tunnel (which was "B") and the double, which would make it so we had to do the straight tunnel on the last discrimination.  I thought this was our best bet, but I knew I would really have to stop to make sure she wouldn't go over the A-Frame!

In the end, it went perfectly!!  I did blind cross the double, and after that she really picked up speed!  Then, I stopped to signal the tunnel and she was taking it before I even realized it!!

The end of the course was very straightforward, and we got it done!

And that left us with one to go!  It was surreal, it was exciting, it was nerve wracking, but it was awesome, too!

So, we headed back on Sunday for our Snooker run.

When I first saw the map, I was dismayed.  It looked difficult!  But I figured out a strategy that would work for us, and when we walked it, I saw that it was incredibly straightforward.  Really, this was the kind of run that Tessa and I could do best!  It was perfect!

For some reason, I had it in my mind that she was going to knock the bar on the second jump when I did the front cross!  I don't know why - she has never knocked a bar in competition on a front cross that I can recall!  But I guess I had to obsess over something, and that was it.

I practiced it a couple of times on the warm up jump to try to convince myself that it was not going to be a problem, but that didn't work!

We just had to do our best!

Finally the moment came!  This was it!  Really, the run we had been working for the privilege of taking together since the day I sent in her first CPE entry in spring of 2012!  And it was one I knew we could get done!

Snooker is the best game to finish a C-ATCH on!  We beat the horn and finished everything, so there was no doubt that we had qualified!

We got a round of applause and we got to take a victory lap!  With the big ribbon, of course!!

I do have the victory lap on video.  Unfortunately, my camera got fussy and the video is blurry.  I am SO glad the run was clear!

Here is the video, in spite of that!

Here is our ribbon!!  It is the biggest one I have ever gotten for anything!!!

And I got to decorate our C-ATCH bar!

Tessa got a rain of chicken after that!  We didn't walk much because it was raining, but we did take a bit of a walk!

I was extra happy to finish this at Periland.  Maddie and I, eons ago now, earned our very first Q's, and our very first Agility titles, at Periland!  Of course, that was when it was outdoors, and it was very different.  But it still makes me feel like starting with Maddie, and then going on with Tessa, all came full circle in that experience.  Tessa and I finished our big goal on the same ground where Maddie and I really got started.

What now?  Oh, we are going to take a few trials and just have fun.  Run what I feel like signing up for, and just enjoying our Agility together.

Then I will think about new goals!

For now, I am going to just be thrilled beyond words for my girl!! 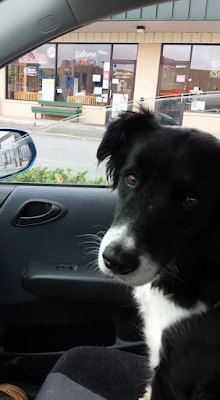 Waiting for our Pizza after the trial.  Yes, Tessa got some pizza!