This week, many dog Agility bloggers wrote blogs on the topic of fun for the Dog Agility Blog Action Day.

I am late to the party, but I would like to write about this topic because it is one close to my heart when it comes to Tessa and Agility.

When I met Tessa, she was almost completely shut down, and about as fearful as I've ever seen a dog.  She was, in particular, afraid of people, including me. 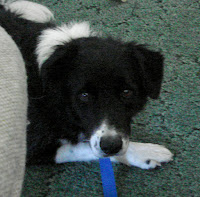 Do I really have to be in this room with you?

In her first weeks at my home, the thing about Tessa that struck me the most was that she had no joy.  She spent most of her time hunkered down on a piece of furniture, either with her eyes closed, seeming to exist in a world that shut out everything around her, or pretending that she wasn't watching me with a disinterested expression.  I knew, even then, that she was studying my every move, but she was not going to let me see that.

I knew that Tessa had good reason for being the fearful, depressed, and disengaged girl that she was.  But, it made me sad.  I liked her a great deal and, of course, I wanted her to have joy in life. 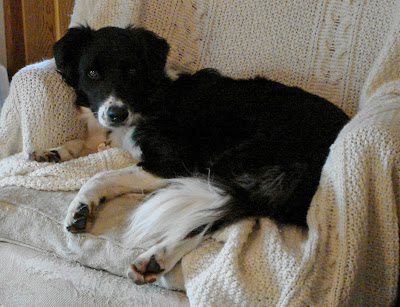 Back in her early days, this was a "happy" expression for Tessa!

The first time I ever saw the slightest sparkle in her eye, we were outside and she suddenly took off at a run after one of my dogs.  And in that second - the first time I saw her run - a thought crossed my mind, "Agility . . . maybe?"

It wasn't because I saw a star in the making.  It wasn't because I was thinking about titles.  It was because there was something in her demeanor as she tore across the yard at a run that made me think she just might love it.  I saw just the tiniest glimmer of a happy girl, and I wondered where that might take us together. 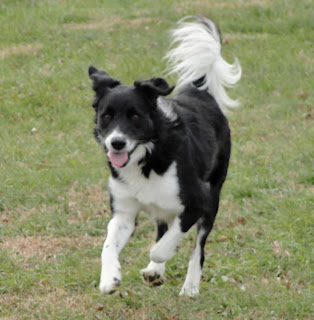 Running and jumping fun for Tessa?  I wanted to find out!

Several months later, Tessa and I began to take basic training class together.  As part of our warm-up for that class, the instructor would put out pieces of board for the dogs to walk across, a tip board, jump bars, etc.  Again, the first time I watched Tessa walk over the top of a board, I saw something in her attitude change.  I had half expected my still-somewhat-fearful girl to avoid that sort of thing, but she ate it up.  With something that hinted at the slightest bit of . . . enjoyment.

Soon after that, Tessa and I took a jump class.  As we worked through the exercises in the class, Tessa met with an internal struggle.  The problem was not with the skill of jumping itself.  Tessa had demonstrated a high aptitude for jumping when she would spring from one piece of furniture to another to avoid being anywhere near me as I moved around the house.   In fact, the difficulty arose from the very fact that Tessa actually liked jumping!

At that point, although she had come very far from where she had been when I met her, Tessa was still very much in "survivor mode".  When we were in public situations, she was always watching her own back.  She had to make sure nobody was standing behind her, literally, or she could not carry out a task!

Now here we were, and I was presenting her with an opportunity to do something that she clearly liked, but in order to be able to do it, she had to let go of her worries and allow herself to enter into the moment and enjoy the jumping.

Tessa had to make the choice between worrying about survival or having fun.  If she was going to jump, she had to trust everyone in that room.

This was a battle that I wanted Tessa to win.  By then I knew her well enough to know that there was a happy, confident, fun loving girl somewhere inside of her.  For Tessa's own sake, I wanted her to be able to be that girl.

And, in the end, Tessa was victorious! 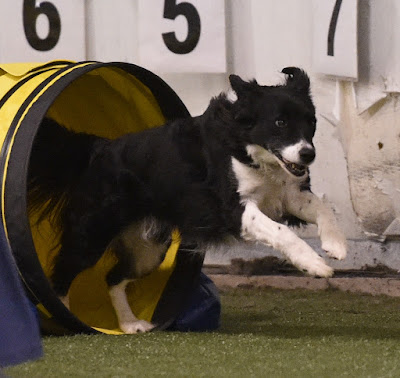 The tunnel was Tessa's biggest challenge.  It took more than two 8 week class sessions to get to the point where she would go through a short tunnel willingly.  Now they are part of the game she adores.

But, in the end, Tessa blossomed into the lovely jumper that I am proud to run with every time we step into the ring.

And here's the thing.  For Tessa and me it is always about fun.  It always has been.  Back when we first began, we worked and worked and worked, and my hope in all of that was that Tessa would come to a place where she would throw all caution to the wind and have fun as she and I played this game together. 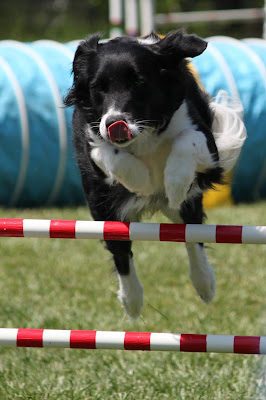 There is no context where I see Tessa as the dog she was always meant to be than when she is running an Agility course.  She is relaxed, and the depths of her joy shines from her eyes.

That is what I always wanted most for her, and it is something that I focus on when we are trialing.  Of course I want to make time, and I want the run to be clean, and I don't want to make any mistakes in the games.  But if we are overtime, there are all manner of faults, and I have made mistake after mistake and Tessa has had fun, then the run was as success in my book! 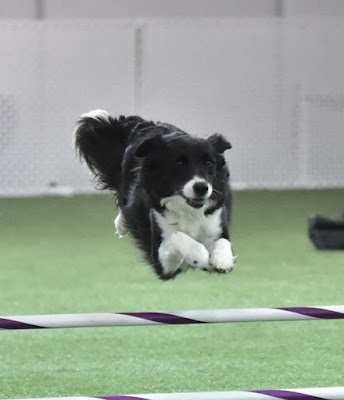 I don't view "having fun" in Agility as something superfluous, nor as a component of this discipline that would exclude all others.  I believe that it is entirely possible to make fun one goal among the many that I have as an Agility trainer and handler.

Maybe that has been one of the greatest lessons that I have learned from Tessa: the journey that we have taken to reach our fullest potential in the sport of Agility has been some of the most fun that we have shared together. 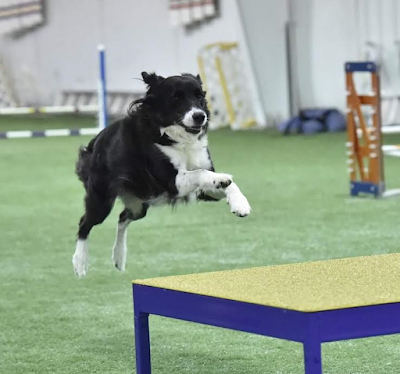 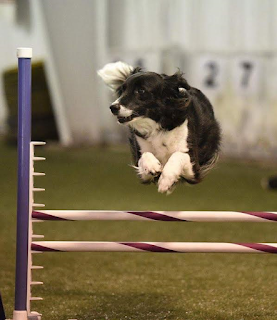 The Amazing Flying Tessa!
And loving every second of it! 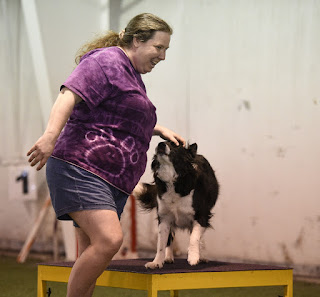 At the end of every run, Tessa and I connect.  I give her a scratch on the head, or a kiss.  And she waggles her tail with unrestrained joy!