Potential - latent qualities or abilities that may be developed and lead to future success or usefulness.

Having worked with fearful dogs and dogs with temperament issues, I know well that potential can be a double edged sword.  It can be exciting, encouraging, and a source of great hope and anticipation to see potential in a canine sport partner.  And it can be upsetting, frustrating, and a source of much consternation when that potential is thwarted again and again by limitations grounded in the dog's own mental make-up.

Even in the case of a temperamentally sound dog, the capacity for the team to reach its potential can be thwarted by life circumstances, time and resources available to train, and the rather short lifespans, in the big picture, that our dogs are granted.

This is on my mind because of something that I read online recently.  A statement was made that a dog rarely, if ever, reaches his or her potential.  That made me think . . .

In retrospect, I don't believe that Maddie did reach her full potential.  I would say that, given my limitations as a new Agility trainer and handler, and her age when we started, we went very, very far together.  If I had it to do over and I knew what I know now and I had started her much earlier, she and I could have attained a much greater level of skill.

In a sense one might say that she did reach her potential, since the circumstances were what they were and we really did the best we could within those circumstances.  But, objectively speaking, Maddie had potential as a performance dog that we never achieved as a team.

On the other hand, I would say absolutely and unequivocally that Speedy reached his potential.  Although he did grow and improve throughout most of his life, he did peak as a performance dog around the age of 8 or 9 and then we hit walls that we never really could move past.  And not for lack of effort and excellent quality training on my part.  We got to a point where he really had given everything that he had in him.  After that we "rode the wave", enjoying the skills that he had, and dancing for the pure joy of it.

Had I known what I know now when he started there probably are little things he could have done.  Maybe we could have managed that last Intermediate Freestyle leg in WCFO if we had a bit longer at his true peak.  But I will never feel that our lack of Intermediate title was a failure.  Honestly, it was beyond his reach, and our reach as a team.  That we got two legs at all was almost a fluke.  Novice truly was his master level.  Given his early fear issues and extreme overstimulation issues, he needed the arm support that Novice allowed.  And, of course, he just thrived in the format of the Challenge.  I will always consider that the true development of his potential.  He did his best work in the Challenge format and it is right and just that he is a Dogs Can Dance Challenge Champion.

Dean is an interesting consideration.  In so many ways his life has been a struggle of striving toward untapped potential.  His anxiety and noise phobia are a far more severe handicap to him as a performance dog than Speedy's issues were.  Maybe Dean's true potential is in video work.  And I would do well to put my focus there with him.  Perhaps if I do that I will one day say, as I do with Speedy, that his real potential was met.

And, of course, Tessa is my sky is the limit dog.  I will never bring her to her full potential because I truly do believe it is limitless.  There will always be more that she could learn and could do.  I guess someday old age will take care of that, but as a young and vibrant dog in her prime, there really is no training challenge that we can't take on together.  It really is all about preference.

I believe that the balance that dog sport enthusiasts would do well to strike is between the dog's potential and our expectations.  In the past I have allowed what I perceive as my dog's potential to translate into expectations on my dog that are too high.  It has been important to learn to recognize and honor and work around limitations.  Sometimes even to adjust expectations accordingly.  On the other hand, there are times when recognition of potential is the impetus to keep working when things get difficult.  If we fail to see potential, why set goals?

In the end, I like to think of potential as something that I can view as a source of inspiration, but as something that I choose not to set my heart on.  When I look back on Maddie's life, I don't regret the fact that she didn't reach her potential as an Agility dog, but I am grateful to have had the chance to take her as far as I was able.  When I look back on Speedy's life, I think our performance journey together was perfect.  We shared the ride of a lifetime because he was exactly who he was.

I want that for all of my dogs - to look back and see potential as something that was an excellent servant, but never our master.  No regrets because of what we didn't do, but full appreciation of everything that we did. 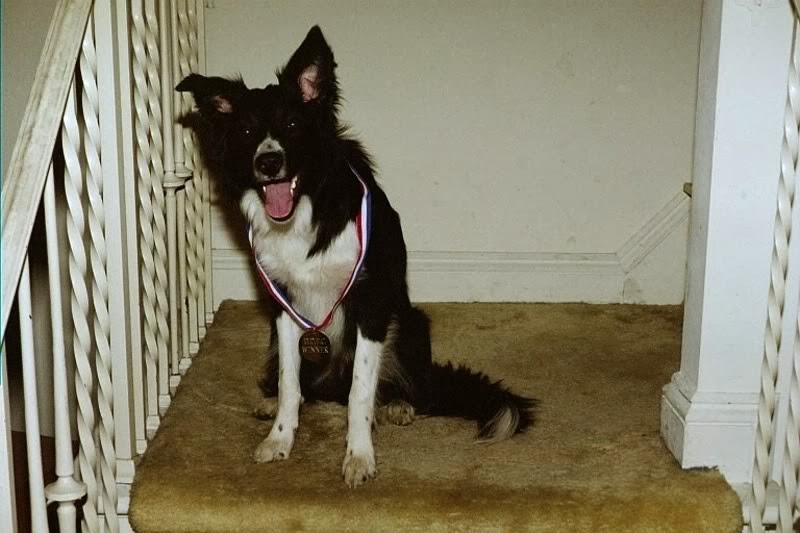 Speedy's "graduation" from Basic Obedience photo.  The "stay" was a major accomplishment for young Speedy!