Just for fun I am copying my description (posted elsewhere) of Tessa's very first ever training class.  This class took place on January 6, 2011.

Tessa had her first day of training class today and it went well - really well!!  She really was ready to go it on her own!

Weeeeeellllll . . . she wasn't convinced of that when we first left.  She was NOT happy about being separated from her buddies to go off in the car on her own!  When I first sent her out the front door, Dean and Maddie slipped out!  I had them come back in and Tessa managed to slip back in!  Finally I got her out there alone and she proceeded to glue herself to the door and wait for her pals there!  I put a leash on her and led her to the car.  I had to go back to getting in the passenger side and crawling over to get her to follow me to get her in.  Once in the car, she settled, and once we got to the school, she was fine.

Yes, I could have brought Maddie or Dean along and left them in the car while we were inside, but I think it is best for Tessa to start getting the hang of going off by herself.  She will have to share with her brothers and sister soon enough.

I am smart to Tessa's tricks now, so I opened the window and slipped my keys and the mat onto the roof of the car before I got her out.  I have my old bait bag to use with her at first (the same one I used with Speedy, Maddie, and Dean) and it was tied around my waist.  I double leashed Tessa with Maddie's martingale before opening the car door, but we had no issue.  She got out, turned to wait for me while I got the mat and keys off the roof of the car, and she went right in the door without any problem.  Once in, she found a comfortable bench car seat that is in the midst of the crating area.  That became her immediate safe spot and I knew then that no matter what happens there, she will always be fine!

Tessa was happy there and we waited for class to start.  There were a few people out on the floor with dogs and Tessa watched with interest.   She grumbled at them a little - I think because they were "out of control", so I taught her LAT.  She learned the game in like two seconds!  Then a friend came in with one of her young dogs and we talked until it was time for class to start.

Once on the floor, the instructor had us do a "power walk" around the room.  We were to walk with purpose and just let the dog come along.  Tessa did really well.  In fact, that was the perfect exercise for her.  She walks along with me really well and she seemed to like it.  This gave her a chance to acclimate to the room and to the people and dogs in the room.  Even though the dogs were technically supposed to be on the left, she kept moving to the inside of the circle, which was on my right, but I didn't care.  I want the right-left balance in her that Dean has (that is one thing I did very much right with him!), so I let her choose where she was comfortable.  After about five laps around the room, we all went to a spot and the instructor talked to us about basic stuff.

That was when Tessa noticed the man!  There was a man sitting on the sidelines.  He was just watching - a spouse of one of the ladies in class.  She was cautious of him, but figured out pretty fast that he wasn't moving.  I took the opportunity to start to show her that he was of no consequence.  I tossed treats on her mat and let her do some other very basic things we've worked on.  She did relax considerably and by the time we started doing exercises again she was able to do them even with the man there.

After the talk, we did an exercise where the dog would sit, we would mark, reward, praise.  Tessa liked that.  We did that a few times.  Then we did a luring exercise.  Perfect for her!  We lured a sit, a down, a sit, a stand.  We moved slowly and Tessa did well.  The first time she was hesitant, like "whaaaaat are we doing?", but once she had done it once, she became almost eager and she seemed to like that game.

Then came a real challenge!  We started to learn to lure a move into heel and sit.  That was harder for Tessa.  She's not sure about being on my left.  But I got her there.  I could only lure her to within a foot of me, so I did that and then moved in to her and gave her a jackpot.  I'm going to use a sort of backchain to get that, I think.  I tried on my right, but she was finished with the game by then, so we will work that at home.

Next we started to introduce heel and a recall.  We moved forward with the dog in heel, called, and ran backwards (to do a comefore).  Tessa wasn't super thrilled about this, but she did well.  We were over by the dogwalk and she was a bit suspicious of it.  Once we moved away from it into the center of the room, she was happier.

Finally, we started to introduce the sit stay.  She didn't like me taking her collar, so I put her in a sit, put a treat down, covered it with my foot, and released her to it.  That worked well for her.  I know this really goes against her instinct which is a very strong, "see food grab!"  So, we will take this one kind of slow.

All in all I was SO proud of my girl!  She had her moments when she was nervous and had to mentally work through some things, but by and large, she seemed to enjoy herself.  She definitely found it very interesting.  And she is eager to work with me.  It is clear that she wants to learn - she often gave me those eyes that say, "what next?".  This was such a huge step for her.  I can't believe she got this far!  And I can't wait to get to our homework and then go back next week!

She was so ready for this!

Tessa one year ago: 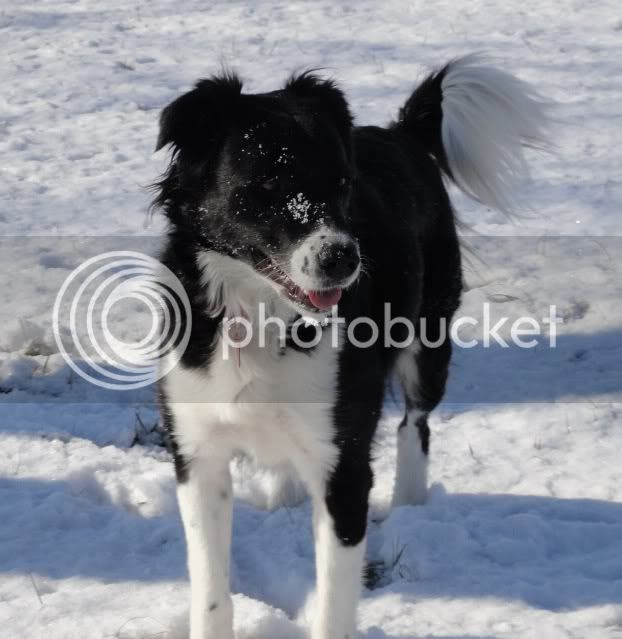 Great memories, and I love to think about how far she has come in just over a year!
Posted by Kristine at 6:46 AM